On April 12, the Museum of Moscow, together with the Triumph Gallery, will open the Neon exhibition of Alexander Yakut’s paintings, which will present the latest works by a famous Moscow artist and curator. The dark, twilight canvases depicting the suburbs - highways, fields and railway crossings - are filled with internal glow. This explains the name of the exhibition. 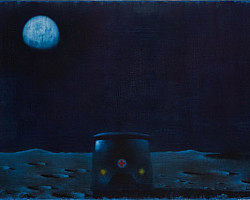 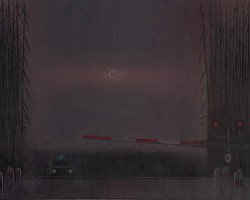 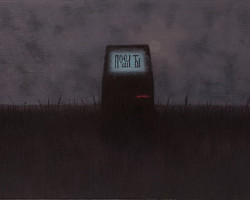 This project is the return of the artist after a long, almost ten-year hiatus. The exhibition will feature about 20 works, some of which were completed recently and will be shown for the first time.

The scenes of the artist’s paintings are dedicated to the suburbs, suburban reality - a phenomenon that today determined the existence of a huge number of Muscovites and visitors. The image of suburban life that we see in the works of Alexander Yakut is far from idyllic with the image of a single-family house with a front garden - Yakut suburbanism appears as a network of empty highways, railway crossings, high fences.

The artist, who himself prefers country life for a long time, shows that the space of the suburbs is not an alternative to the modern metropolis, but its dark double, a deserted space with vitality pumped out of it, light and joy. Its suburb resembles the “far side of the moon,” or rather, the far side of Moscow, focused on over-centralization and overconsumption.

Consonant with the ideas of the artist and the organization of the exhibition. The architectural solution of the exposition is an elongated dark space, which, according to the artist, is associated with David Lynch’s favorite image - the night highway. Throughout the length of this “highway”, steles with the author’s works, as if born out of the dark, will appear on the right hand of the viewer.

The curator of the exhibition, Evgenia Kikodze: “The questions that Alexander Yakut asks in his works are close and understandable to our museum. On the one hand, he is actively studying the topic of hypercentralization, and on the other, he is investigating the problem of crowding out to the periphery everything that, according to some indicators - education, prestige, living standards - does not correspond to the luxury metropolitan center. But if sociologists understand this problem simply as a gap between the quality of the environment of the urban core and the outskirts, then the artist shows us the whole full-fledged and voluminous phenomenon of a “different life” with a clear bias in mysticism and suspense, related his painting to cinematography. One of the important expressive features of this series of paintings is the rhythm, repetitive elements of the plot, which makes it related to poetry and music, especially dark ambient. The main thing that distinguishes the works of Alexander Yakut in the modern cultural context is an amazing color and a special dark glow, which gives the stories an otherworldly look and gives the work an amazing gloomy charm. "