From March 31 to April 11, 2017, a personal exhibition will be held in the fine arts hall of the Volga branch of the Russian Academy of Arts and the Russian Artists Union 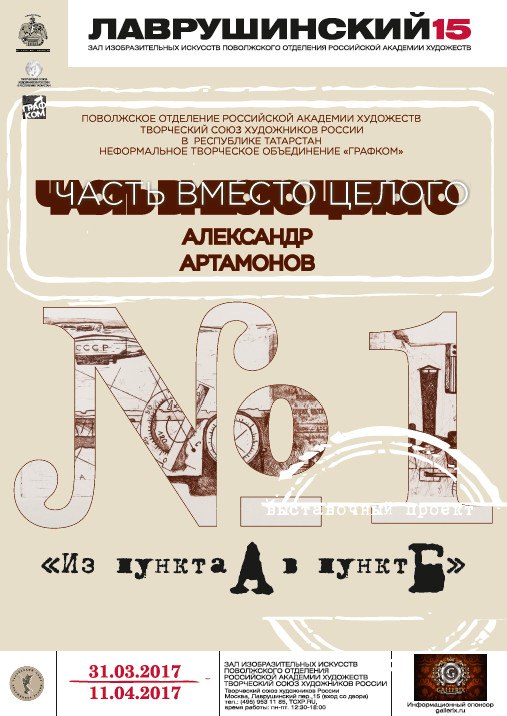 "From point A to point B" of the leading Kazan graphic artist Alexander Artamonov. This is the first part of the large exhibition project “Part instead of the whole”, in the format of which etchings created by the author over the past five years will be presented. The exhibition will be exhibited in several cities.

The name of the exhibition “From point A to point B” accurately reflects its content and the nature of the author’s life position - always on the road, always on the move. Kazan art critic Olga Ulemnova presents the concept of this exhibition as follows.

“Point A” is a collective image, the beginning of the author’s life: childhood spent in Siberia, clan ties involving in the historical fate of Russia. The theme of the journey is implemented in a whole series of sheets: railways and other means of communication, which the Pointer recalls, appear as a sign of our recent past, the time of unhurried (by today’s standards) movements on land, water and air. Series “V. S. Zh. D. P. ”(The Great Northern Railway Track) - as a symbol of the unfulfilled dream of pioneers who dreamed of exploring new northern lands. A series of illustrations to the poems and poems by N. S. Gumilyov, combined by the artist in the art book “African Impact” (with the assistance of Mikhail Pogarsky), reflects the poet’s deep passion for the exotic nature and culture of the “black continent”, which had a strong influence on Russian culture in the early 20th century century.

“Point B” is a specific geographical point on the map, the ancient island town of Sviyazhsk, a symbol of military victories of the Russian army, the stronghold of Orthodoxy, the ark, which has preserved the original Russian traditions, which has become a kind of pilgrimage for Kazan artists, which gives impetus to creativity historical past, but also its present. The symbolic figure of modern Sviyazhsk was the artist Evgeni Golubtsov, whose house-workshop since the late 1980s has become a place of attraction for artists and art historians of Kazan, Tatarstan, Russia and abroad. Sviyazhsky "old man" having played an important role in shaping a whole generation of young Kazan artists of the 1980s and 90s, opened the doors for them in the galleries of Holland, the path to recognition. "Ark" by A. M. Artamonov - homage to the Kazan master and the starting point for the next trip. 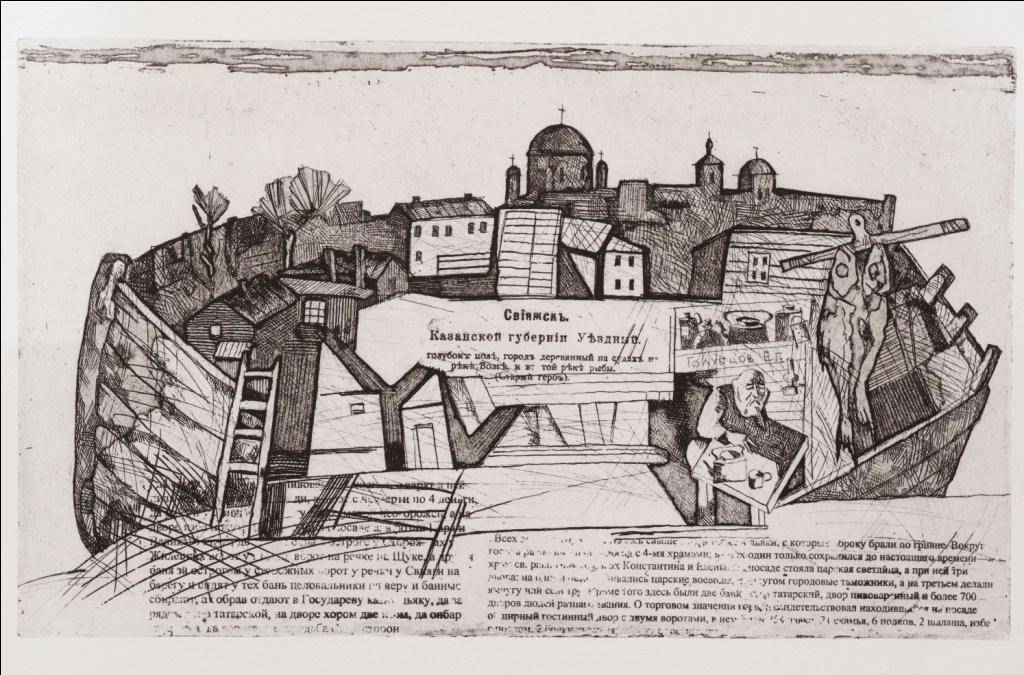 Olga Ulemnova so characterizes the work of her countryman: “Alexander Artamonov is an artist of the analytical warehouse. He does not just depict the world around him or expresses his emotions, but turning to the search for the internal relationships of objects and events, plunging into the depths of human (personal and historical) memory, he explores the metaphysical foundations of life. Artamonov developed his own artistic style, synthesizing the contemplation of the Italian "metaphysical painting" with a rational abstraction of Russian avant-garde artists. His compositions are carefully verified, built on the contrasts of the realistic accuracy of objects, a complexly organized plane and a mysterious, mystical atmosphere. Slowed rhythms mask the intense work of the spirit. Own artistic vocabulary of forms and objects flows from one work to another. All this creates a special space in the works of A. M. Artamonov, permeated by various meanings, the solution of which is a fascinating occupation. In etchings, this style has not changed, but thanks to the rich capabilities of this technique and its varieties, masterfully mastered by the artist, he has become even more sophisticated and elitist, requiring more and more intellectual effort from the viewer. ” 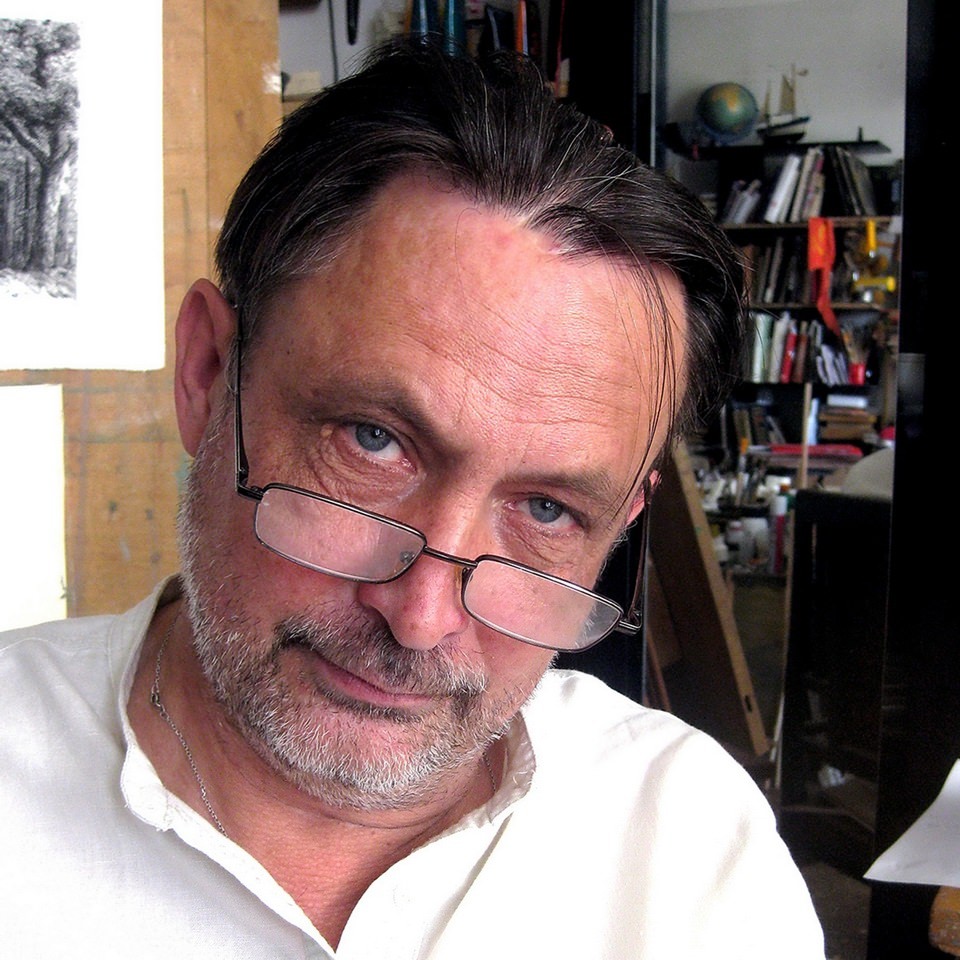 Alexander Mikhailovich Artamonov is a theater artist by education. In the 1990–2000, one of the leading painters of Kazan, actively exhibited in European and American galleries. Since 2011, he became interested in etching, discovering the inexhaustible possibilities of this technique, which since the 1990s was in Tatarstan on the sidelines of the art process. One of the organizers of the Kazan International Biennale of Printed Graphics, which has been held since 2011 and gathers dozens of masters from around the world. Since 2012, he heads the graphic section of the Creative Union of Artists of Russia in the Republic of Tatarstan, since 2013 he is the head of the Center for Printed Graphics of the Republic of Tatarstan, whose work is carried out under the patronage of the Volga branch of the Russian Academy of Arts. A. M. Artamonov organizes master classes and seminars at the art residence of the State Museum of Fine Arts of the Republic of Tatarstan in Kazan and at the State Historical, Architectural and Art Museum-Reserve in Sviyazhsk, providing graphic artists from Tatarstan and neighboring republics with the opportunity to learn from the experience of leading Russian graphic artists, as well as specialists from Sweden, Italy, USA.