A miniature park has opened in Moscow

Copies of 80 of the most famous Russian sights were presented in Moscow at a scale of 1:50. In a reserved place in the south of the capital, in Tsaritsyno Park, the exhibition “Russia in Miniature” has begun work - this is the largest project in the history of architectural modeling in Russia. 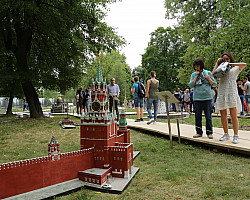 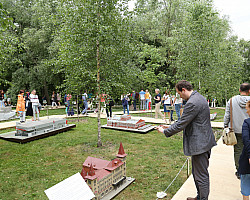 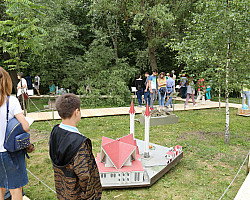 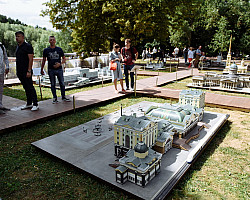 The list of attractions worth seeing at least once in your life includes the Moscow Kremlin, the Cathedral in Kaliningrad, the Museum of the History of Orenburg, the Ufa Cathedral Mosque "Lala-Tulip", the observation tower on Mount Akhun (Sochi), the sculpture "Motherland Calls! ”(Volgograd), Kazan Cathedral (St. Petersburg), The Heart of Chechnya Mosque named after Akhmat Kadyrov (Grozny), the Museum of Geology, Oil and Gas (Khanty-Mansiysk) and many other palaces, castles, cathedrals of railway stations and museums.

The exhibition "Russia in Miniature" in one of the most picturesque places in the south of Moscow - Tsaritsyno Park - allows you to look at the sights from all corners of our vast country. 80 copies of architectural monuments from Moscow to Vladivostok at a scale of 1:50 are distributed over a site with an area of ​​one and a half hectares, they can be examined within an hour.

According to the author of the project, Viktor Zhilenko, teams of 60 specialists in various fields have been working on the creation of the “Russia in Miniature” park for 5 years. All architectural copies are very accurate, with a high degree of detail.

“The miniatures are made of architectural plastic, which conveys an accurate picture of patterns, bas-reliefs, windows and doors of architectural structures,” says Viktor Zhilenko. “The study is so detailed that you can read the signs on the doors of institutions.”

The miniature park in Tsaritsyno allows literally an hour to see dozens of monuments of Russian culture and take a short excursion into history. Only here you can transfer from the Crimea to Vladivostok, from Kazan to Tomsk, from Khabarovsk to Nizhny Novgorod in just a few dozen steps, and there are a lot of such “routes”.

The director of Tsaritsyno Park, Elizaveta Fokina, emphasizes the uniqueness of the exhibition, which consists in the absence of analogues and its educational and patriotic mission - to arouse interest in studying the historical and cultural heritage, broaden horizons, acquaint with the wealth of Russian lands. According to the director of the Tsaritsyno Museum-Reserve, the project is aimed at moral, moral, aesthetic education.

“The majesty of the miniatures of historical sites is admirable and proud of their homeland,” says Elizabeth Fokina.

According to the organizers of the exhibition, the main objective of the project is to increase the popularity of domestic tourism in the country and to familiarize the citizens and guests of the capital with the architectural monuments of our country.

The objects of the exhibition were created by decree of the President of the Russian Federation for the development of domestic tourism. Visitors to "Russia in Miniature" can learn many new places for their future travels. The project creators are planning to present the maximum number of regions and their historical sites.

Guided tours will be held every 15 minutes. In addition, each visitor who downloads a mobile application to his phone can access an audio guide in 25 languages ​​of the world based on QR codes.