Igor Dryomin: "In the labyrinth of meanings." Exhibition of works by Sergey Gusarin

December 22 at the Museum and Exhibition Complex of the Russian Academy of Arts Zurab Tsereteli Gallery of Arts (Prechistenka, 19), the exhibition of Sergey Gusarin’s works “In the labyrinth of meanings” was opened. The audience is presented about 100 works of graphics, painting, icon painting and photographs.

S. Gusarin was born in 1962 in Rybinsk. In 1979 he entered the Yaroslavl Art School, is engaged in painting, graphics, mastered the art of art photography. Already in this period, his original style began to take shape, in which unexpectedly, but harmoniously, realistic and surrealistic beginnings, pictorial and graphic techniques were combined. 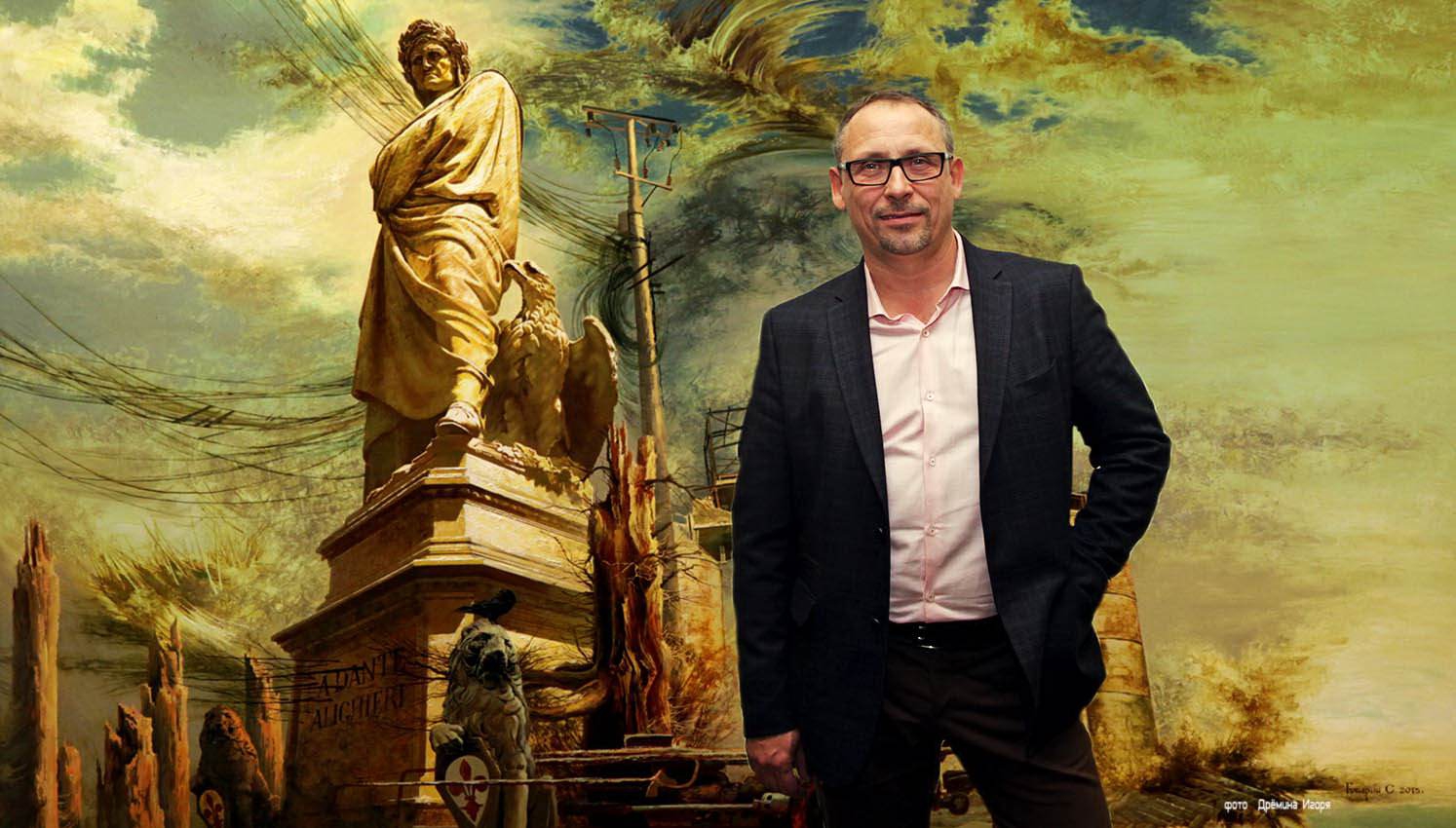 The penchant for constant search in art led S. Gusarin to the Rybinsk Puppet Theater, where from 1986 to 1989 he was the main artist. In 1989, the artist took up the restoration of ancient Russian painting (icons). In 1994, he created the Lik icon-painting workshop, now known in Russia and abroad. In 2007-2010 headed the Rybinsk branch of the Union of Artists of Russia. Since 2011, is a member of the Creative Union of Artists of Russia. 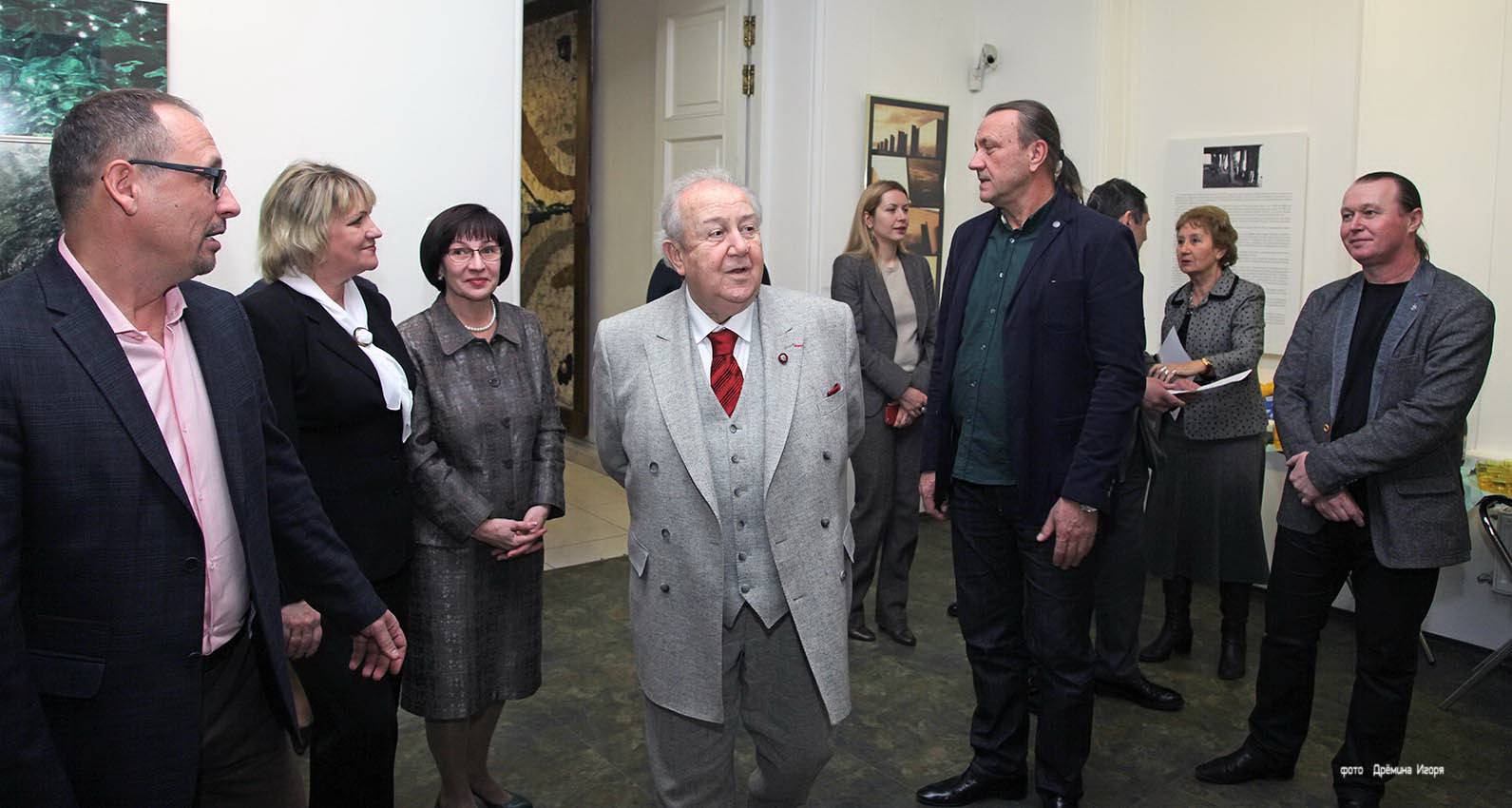 S. Gusarin constantly participates in city, regional, regional, national and international exhibitions. His works are presented in the Rybinsk Museum-Reserve, private collections in Russia, Germany, France, the USA and other countries.

Sergey Gusarin always perceived creativity as a way of understanding the meaning of being, God, the world around him and himself. 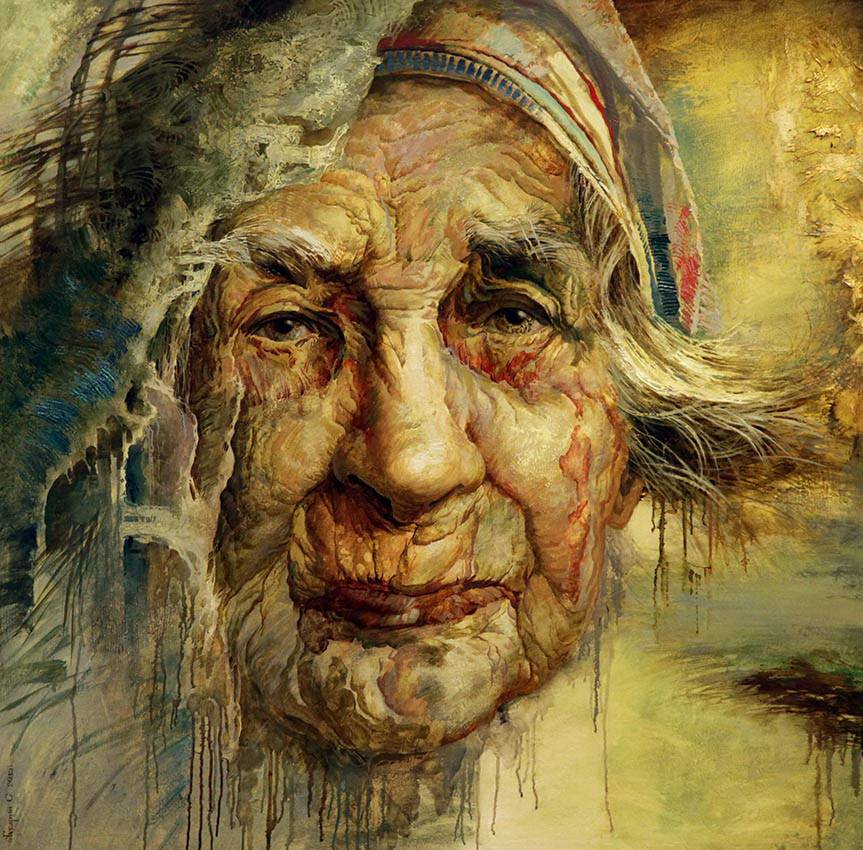 Since the beginning of the 1990s, the artist has worked a lot from nature - primarily as a graphic artist and photographer. Trips to Baikal, Valaam, academic cottages to them. I.E. Repin in Vyshny Volochyok and the name of D.N. Kardovsky in Pereslavl give him the key to combining living natural detail and abstract abstraction. Over time, S. Gusarin gradually, but thoroughly studied the languages ​​of other forms of art, which gave him his "optics" vision of the theme and subject. From this diversity of views, an image is often born that the author hatches for a long time and then is embodied in graphic, pictorial and even photographic work.

In the bizarre labyrinths of dry grass, in the twists of tree bark, breaks of dry branches, in cypress logs, he catches worlds hidden from human eyes, living by their own temporal laws. 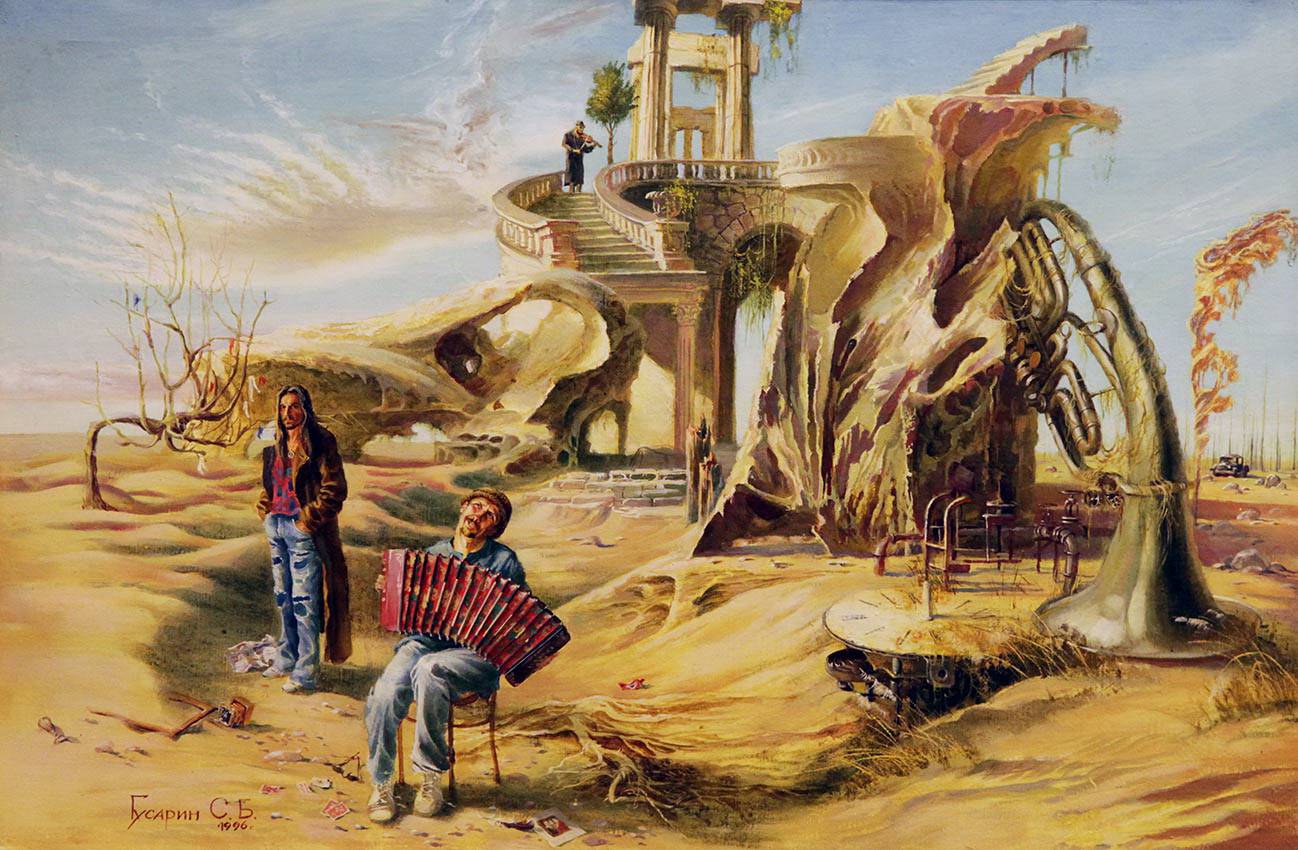 In 2012-15 the artist creates a series of picturesque, graphic, photo works and art objects, the most significant of which formed the basis of the exhibition. The works “Forefather” and “Foremother” can be called the key works of the exposition.

Sergey Gusarin’s graphic works are exquisite in form, full of light, contemplative, but internally very dynamic. Looking at the artist’s work, you begin to catch this internal movement of time, pulsating in the apparent immobility of the object, the swing of the pendulum and see how small cracks appear on the stones, how the trees are covered with moss, and trees begin to sprout through the roofs of abandoned houses. This figurative symbolism found expression in the series of graphic works “Secret of Closed Doors,” which aroused particular interest both in a wide audience and in the professional community. The Dry Leaves series is a kind of history of mankind in several comprehensive signs.

In the works of the painting series “Petrified Time”, illusory coexists with reality, statuary monolithicity with weightlessness and a hurricane. Each work is aesthetically completed, while in the ensemble with others takes on new meanings. The work is emphasized dialogic: the viewer has a wide field for interpretation. 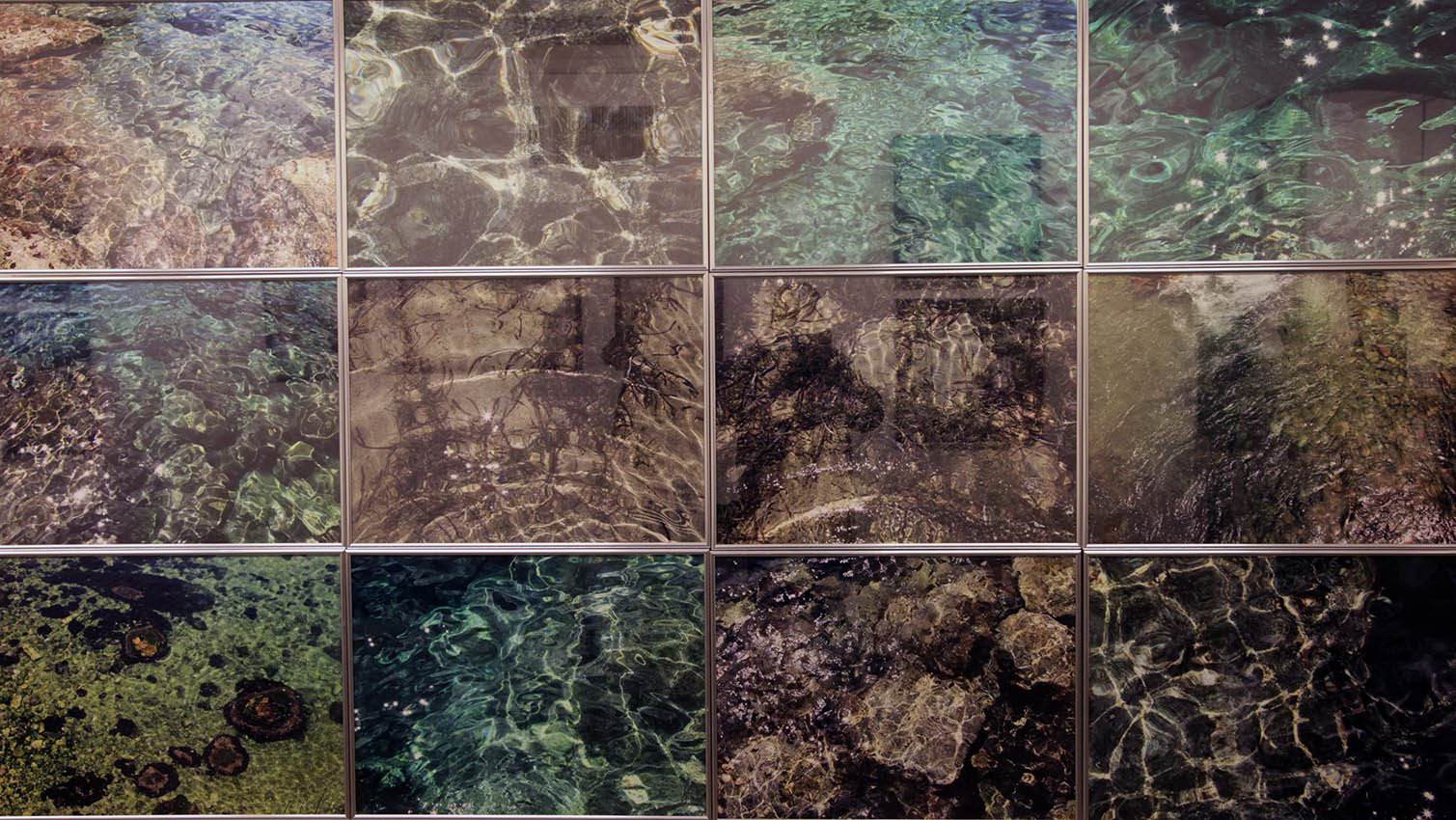 With the help of photography, S. Gusarin strives to feel not only the momentary nature of time, but also its dissolution in the infinite. This duality is interpreted in its own way in the series "Water Magic", which gives the viewer the opportunity to look into another dimension. For the artist, the urban environment, seen from an unusual angle and reflected in a series of urban landscapes, turns out to be the same border as the water surface.

“Time is a multi-valued concept,” says Sergey Gusarin. - Of course, it is connected with history, with life and death. However, they are relative: just look at a hundred-year-old tree and a dry leaf. The first is still alive, but time left its imprint on it: the trunk of the tree is covered with potholes, similar to the wrinkles of an ancient old man. And the sheet has already come off, dried up, but has not disappeared. He continues to live his own unknown life, as incomprehensible and saturated as the former. Just his time was different… "

The exhibition is open for visitors until January 24, 2016. 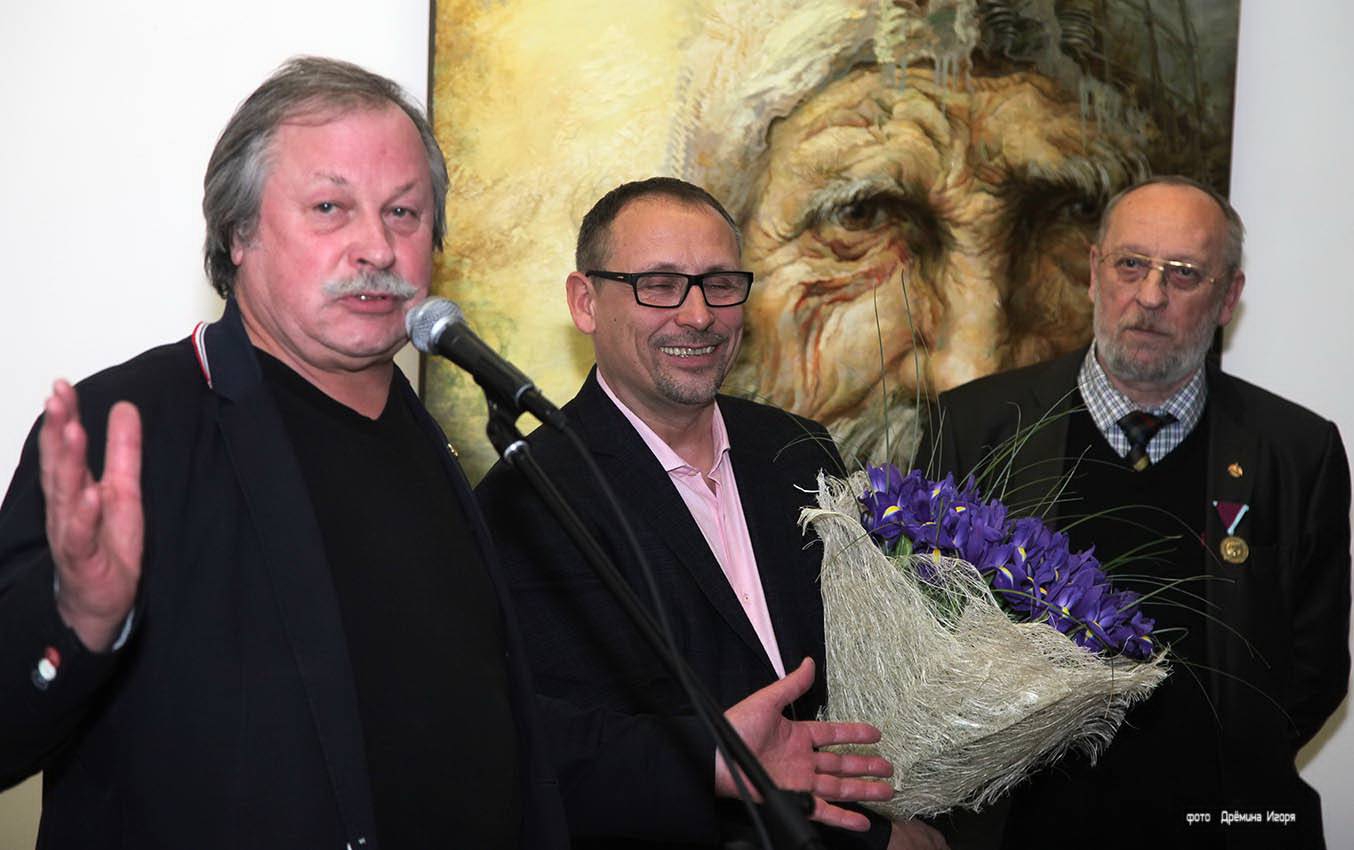