On August 28, at 16:00, the Nagornaya Gallery starts the exhibition “MEETINGS ABROAD. AUSTRIA & RUSSIA ”, which is a continuation of the project of the same name, initiated by the Austrian curator Helmut Hodlmozer in the fall of 2015 in the city of Leonding. 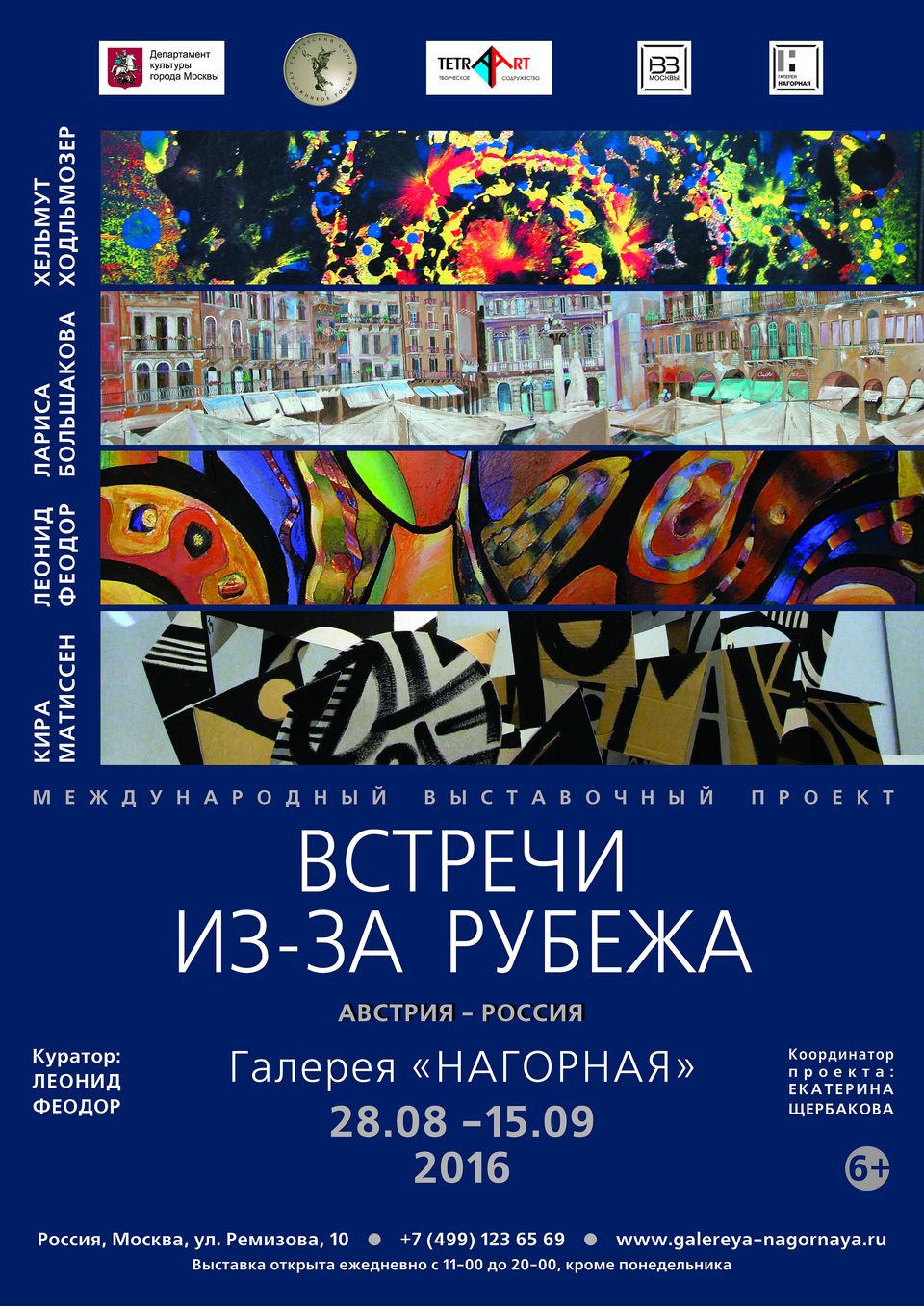 In Russia, the exhibition is represented by Kira Matissen, Helmut Hodlmozer, Leonid Theodor, Larisa Bolshakova under the supervision of Leonid Theodor. They, completely different in style, with their own special pictorial language, recognizable in handwriting, are united by a common desire to speak the understandable language of visual art about their love for the natural world, man and the universe (space). Artists explores the problems of interaction, the inconsistencies of the new time, where one person, or people, or civilization cannot understand and accept a different lifestyle, different understanding and mentality, in the context of the interconnectedness of two cultures (Russia sv Austria) through a variety of artistic practices.

The project shows that the world is the same for all the inhabitants of the planet, despite political differences, cultural traditions and the psychophysiological characteristics of nations, subjects, individuals. Through art - creativity, a dialogue of cultures and mutual understanding begins and continues.

Curator of the exhibition in Moscow Leonid Theodor: “For many years (from 1997-1998, my first acquaintance with H. Hodlmozer), personally getting to know and comprehending Western culture and art, I often felt working side by side with Helmut, and observed some general patterns of development of our work. Helmut calls the direction of his work “Fractal Art”, and I my “Structural Art”. But if you look closely at what we each came to on our own and together, there is something in common that characterizes contemporary art. Each artist accumulates all the discoveries of past centuries and millennia, and in particular of the last twentieth century, passing through himself, keeping in his soul that which is closest to each individual. For Hodlmozer, this is probably the Vienna Secession, German expressionism and an attempt to test Harmony Algebra. Hence the appeal to the scientific Fractal hypothesis. For me, he came to creativity through the deep development of Russian and European culture and art, where the Old Russian art, the Russian and European avant-garde, and an attempt to come to the synthesis of arts were fundamental. And Structuralism, as a way of identifying an image in an object, having its own impulse from nature, but not necessarily imitating nature, but revealing structures that allow you to create according to the same laws as God and Mother Nature does. Here, in my opinion, with the difference in results, there is a similarity in positions. ”

Helmut Hodlmozer - Austrian graphic artist, painter, sculptor, master. Born on November 7 in 1945 in the city of Linz (Austria), studied at the Higher School of Art and Industrial Design in Linz. Participant of Austrian and Russian exhibitions, among them more than 10 personal. Since 1999, together with Leonid Theodore, he has been participating in personal and group projects of the Syntel-Radunitsa international creative workshop in Russia and Austria. The author of several monumental projects in Austria. Works are in Russian and foreign collections. In 2015 he was awarded the medal “Honored Worker of Arts” by the International Association “Art of the World’s Peoples” at an exhibition in Leonding.

Kira Matissen is a neo-futurist artist. Born in 1969 in Moscow. Graduated from Moscow Polygraph, KhTOPP. The main area of ​​work is the search for the interaction of form and information by creating "INFORM" in various artistic practices (objects, media, installations). He works in various artistic practices (objects, media, installations). It is part of the Creative Union of Artists of Russia, the international association "Book of the artist." Participates in many Russian and international art projects. Personal curatorial projects dedicated to the Russian avant-garde.

Larisa Bolshakova - graphic artist, painter. Born in 1953 in Moscow, graduated from Moscow State University. M.V. Lomonosov, after which she began to engage in painting under the direction of the artist Sh. Abdusalamov (Moscow). From 1998 to 2001 participated in the Moscow International Art Salon of the Central House of Artists, from 1999 to the present. at. She has had personal exhibitions in art galleries in Vienna (Austria), London (Great Britain), Leipzig and Kassel (Germany), Verona (Italy), Istanbul (Turkey), as well as in the Marina Tsvetaeva Museum in Moscow and the Institute of Art Studies in Moscow. Since 2003, she participated in projects of the Sintel-Radunitsa international creative workshop in Russia and Austria. Member of the Creative Union of Artists of Russia. Works are in private and corporate collections in Russia, Western Europe, the USA and Japan.

Leonid Theodor - painter, graphic artist, sculptor, designer, teacher at educational institutions of Moscow and the Moscow region (professor). Born in 1955 in the city of Arkhangelsk, studied at the Rostov Art College M. B. Grekov (Department of Painting), Moscow Printing Institute at the Department of Graphics. Participant of more than 400 Russian, All-Union, regional, foreign and group exhibitions, as well as more than 100 - personal (Russia, Austria, Germany, Bulgaria, Egypt).

In 2003 he became a Laureate of the International Biennale of Contemporary Art in Malta. In the same year he was awarded the silver medal of the Russian Academy of Arts. In 2006, the Museum of Russian Culture was created in Moscow from the collection of works by Leonid Theodore. In 2010, he was awarded the title of Honored Artist of Russia. In October 2011, he took 1st place in the exhibition-competition of modern design "The Faces of the Big City" in the nomination Art Design, and was awarded a silver medal in 2012. Laureate of the All-Russian Competition for the Best Scientific Book and the Gold Medal of the 2012 Assembly of Arts for the author’s manual “Language of Creativity”. In 2013, L. Theodore was awarded the Gold Medal of the Russian Academy of Sciences for outstanding achievements in contemporary art and the creation of the 1st Museum of Russian Culture. 2014 - Gold medal for outstanding achievements in the visual arts, laureate of the Russian Academy of Science and Art.

Curator and organizer of more than ten international exhibition projects. He is the author of many articles for all of his projects and the Pinakothek Art Center, as well as articles about artists, teaching methods, and master classes. The works are in museum collections in Moscow, more than 30 museums and galleries in Russia, as well as in galleries and private and corporate collections, Austria, England, Germany, Bulgaria, Belarus, Egypt, Italy, the Vatican, Poland, USA, Serbia, Switzerland, Canada, France, Russia, Ukraine, Uzbekistan, Malta, Morocco, China.

9.09.16 at 17.00 (12+) MASTER CLASS “EVERYONE CAN LEARN TO DRAW”
WITH THE PRELIMINARY LECTURE “LANGUAGE OF CREATIVITY”
according to the methodology of professor Leonid Feodor
Speaker: Leonid Theodor - Honored Artist of Russia

09/14/16 at 17.00 (12+) About INFORM
Creative meeting with the artist with elements of a lecture, showing objects and video art
Speaker: Kira Matissen - neo-futurist artist

Gallery "Nagornaya" began its work in 1978. This is the first state gallery in Moscow. Initially, the gallery showed mainly academic painting (socialist realism, critical realism, “harsh style”, “left” MOSH), but over the years the focus has shifted towards modern digital technologies, multimedia, installations, photography. The gallery carries out many projects in collaboration with major Moscow and regional museums, cultural foundations, creative unions, art universities, cultural centers at embassies of different countries, as well as artists’ heirs and collectors (www.galereya-nagornaya.ru).

TetraArt is a section under the TSKhR, formed in 2014 with the aim of uniting artists working in visual art, combining several types, directions, genres of fine arts or working at the junction of two or more genres, for example, graphic art, painting, relief, collage, photo collage, assembly, art object, video art, as well as literature, music, theater (artists, poets, musicians, artists). The section’s task is to participate in modern TSHR projects and organize personal and group exhibitions that reflect the current state of society, art in all its manifestations. The criterion for participation in such projects is the ability of participants in traditional and modern forms of visual art to reveal the essence of the proposed concept of the exhibition project (http://www.tcxp.ru/sections/zhivopis#tetraart).

The Moscow Exhibition Halls Association is a project of the Moscow Department of Culture dedicated to the decentralization of culture and the modernization of the activities of cultural organizations. The association includes 18 exhibition halls located in 10 districts of Moscow. The projects and programs of the Association are designed to create a special cultural environment of the city with wide opportunities for professional and amateur creativity. (www.vzmoscow.ru)