December 6 in the Perm Gallery opens the exhibition "Sob @ ka", dedicated to the image of the four-legged favorite of man in the visual arts.

A dog lives next to a person for thousands of years. This animal has become not only an integral part of our daily life, a dog can be considered as an element of the culture of many nations. Therefore, it is not surprising that we see images of these animals in the art of various eras and countries. The image of a dog is found in mythology and literature, in the paintings of artists, in medieval and modern sculpture, arts and crafts, in design elements and jewelry.

Dogs began to be portrayed shortly after people learned to portray themselves. Ancient sketchy dog ​​silhouettes were discovered in Egypt, China and Greece. Reliefs with images of dogs carved by Stone Age hunters were found in the Arabian desert. The hunting scenes with dogs and in subsequent centuries remained one of the most popular themes in the visual arts. Starting from the sixteenth century, on the canvases, the dog already appears as a different person, separate canvases are dedicated to four-legged pets. In Russian art, the “dog theme” has gone the same way as in European. Russian artists of the classical school gave the world many works that depict hunting dogs, shepherd dogs, companion dogs. From the 19th century, portraits of dogs themselves began to appear in Russian painting - subtle and psychological, reflecting the inner world of a faithful four-legged friend. The harmonious world of the human-dog community, unfortunately, is adjacent to the dramatic theme of stray animals. Alas, these days, dogs are often abandoned. Artists also turn to the theme of “residents of the streets”, directing the viewer’s eyes to this problem.

At the Sob @ ka exhibition, the images of our four-legged friends will be presented in painting, graphic arts, sculpture, arts and crafts from the funds of the Perm Art Gallery, Perm Museum of Local Lore, Kungur Museum-Reserve and private collections. 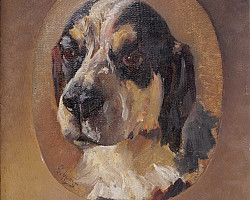 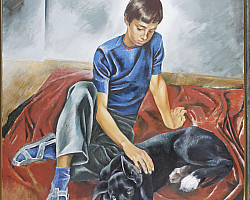 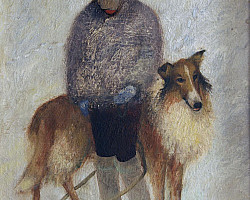 Among the paintings, viewers will see the painting by Paul de Foz “A Dog Carrying a Piece of Meat” (16th century), the study of Rudolf Frentz “The Head of a Dog” (19th century), Hendrick Mommers’s painting “The Passage of Travelers” (17th century) and other paintings. The graphics are presented by the works of such authors as Valentin Kurdov and Kirill Mamonov, Valentin Serov and Petr Sokolov, Alexey Kivshenko and Leonard Turzhansky. Among the porcelain works will be presented the works of leading Russian masters of 1950-2000, Ivan Riznich, Vera Drachinsky, Pavel Veselov, Boris Vorobyov and other artists. Also at the exhibition you can see rare books on hunting, published in the XVIII-XIX centuries. at.

In addition, the exhibition will present the work of participants and winners of the contest "Best Dog Photographer of the Year", which the gallery held on the eve of the exhibition.

The exhibition was organized with the support of the Ministry of Culture of the Perm Territory and will run until February 3, 2019.