In the gallery “On Kashirka” of the “Exhibition Halls of Moscow” Association, the Russian Abstract Art Foundation presents the exhibition “Freedom. Survival. Interaction".

The name of the exhibition embodies the essence of the life path of Vladimir and Nikita, which went through overcoming pain, mutual influence and finding oneself in creativity. Using drawing, Vladimir helped his son defeat the disease, and, literally, get on his feet. This personal shock opened Vladimir the way to painting an incredible emotional range: his paintings are gentle, almost weightless, but also very tough and evil. And Nikita formed a pantheon of constant heroes, including Don Quixote, characters of the Gospel and fantastic creatures, which became sharp metaphors of his battle with pain. 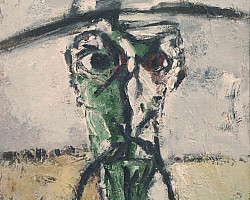 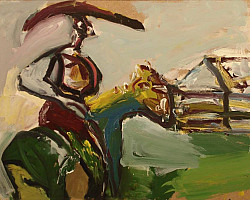 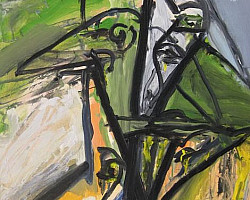 Vladimir and Nikita exhibited together more than once. But for the first time, their works will be accompanied by excerpts from Vladimir’s diaries, presented in separate objects, which he kept since the late 80s, not missing a day and accompanying every verbal description with a sketch.

The exhibition covers the 30-year period of the work of Vladimir Kurdyukov, and is the first large-scale exhibition after his death.

Born in Donetsk. In 1976 he graduated from the graphics department of the Higher Art School. After the institute he was engaged in experiments with color, space in painting and graphics, in search of new possibilities for expressiveness of form. Works are in private collections in Russia, Ukraine, Germany, Italy, France, Greece, Spain, England, Canada, Korea, USA, Kolodzey Art Foundation (New Jersey, USA) and many Russian museums.

Born in Moscow. He studied with his father, artist Vladimir Kurdyukov. From 1999 to 2005 he studied at the Munich Academy of Arts with Professor Zeniuk. Works are in the National Graphic Assembly - the city of Munich in private collections in Russia, Germany, Holland and the USA.