In Odessa, the second personal exhibition of the sculptor Inna Nikolaeva (Israel) will open under the name "INTROSTRUCTURE". On September 15 at 18:00 in the Museum of Western and Eastern Art, Odessa residents and visitors will see sculptures and calligraphy. 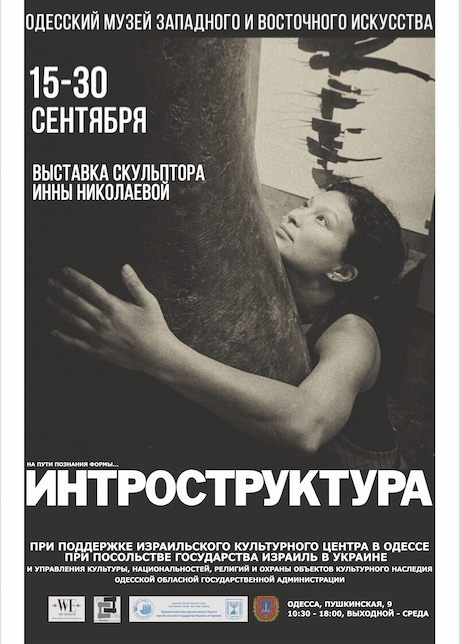 The author of the works Inna Nikolaeva flies especially to the opening of the exhibition from Israel. Over the past two years, Inna Nikolaeva has shown her work at exhibitions in Ukraine and Israel, as well as in New York, Milan, Perugia, Brussels, Sofia and other cities of the world.

"INTROSTRUCTURE" - the second project of the author, which arose in the process of studying her form and morphogenesis. Using calligraphy, the author experiments by replacing classic paper and ink with sculptural materials and tools.

Peering into natural forms, gaining the freedom of calligraphy, the author tries to unravel the secrets of shaping, reflects on the interconnectedness of forms, on a single structure containing all natural forms.

Quotation from the author of the project, Inna Nikolaeva: “To strive inside the structure — to embed a person as a unit in the structure of the universe is possible, in my understanding, only after he knows the form. Shape yourself. Not what we see in the mirror or how we reflect in people. And the fact that we are inside. Not about battle, but about gaining strength. This is my exhibition. About knowing yourself. On the natural morphogenesis and structure of the universe. And my way is simple. ”

The exhibition opens on September 15 and runs through September 30.

Odessa Museum of Western and Eastern Art is located at 9 Pushkinskaya Street, opening hours are from 10:30 to 18:00, Wednesday. Entrance ticket - at the price set by the museum.

The exhibition is supported by the Israeli Cultural Center in Odessa at the Embassy of the State of Israel in Ukraine.

About the sculptor: Inna Nikolaeva from Odessa has been living and creating in Israel since 2011. Member of the FIDEM International Medal Art Federation, member of the New Artists Collegium in Israel, founded by David Zundelovich.

She participated in international art-medal exhibitions in Bulgaria, Israel, Belgium, the symposium of the three countries Israel-Lithuania-Bulgaria, dedicated to Boris Schatz.

He exhibits his works in Ukraine and Israel, as well as in New York, Milan, Perugia, Brussels, Sofia and other cities of the world.