Exhibition "Myths and Allegories in the Fine Arts"

All world art is permeated with mythological subjects, often bearing symbolic meaning. Mythology is a figurative, poetic language spoken by the ancient peoples, trying to explain the phenomena of nature. Earth, sky, sun, stars, mountains, rivers, streams, trees took on the images of the gods. In Greece, “a country of good taste,” according to I. Winkelman, a mythology was born that inspired artists and poets over the following centuries. From individual legends born in various parts of the Greek land, whole cycles of the fates of the heroes and the divine powers that protect them were formed. 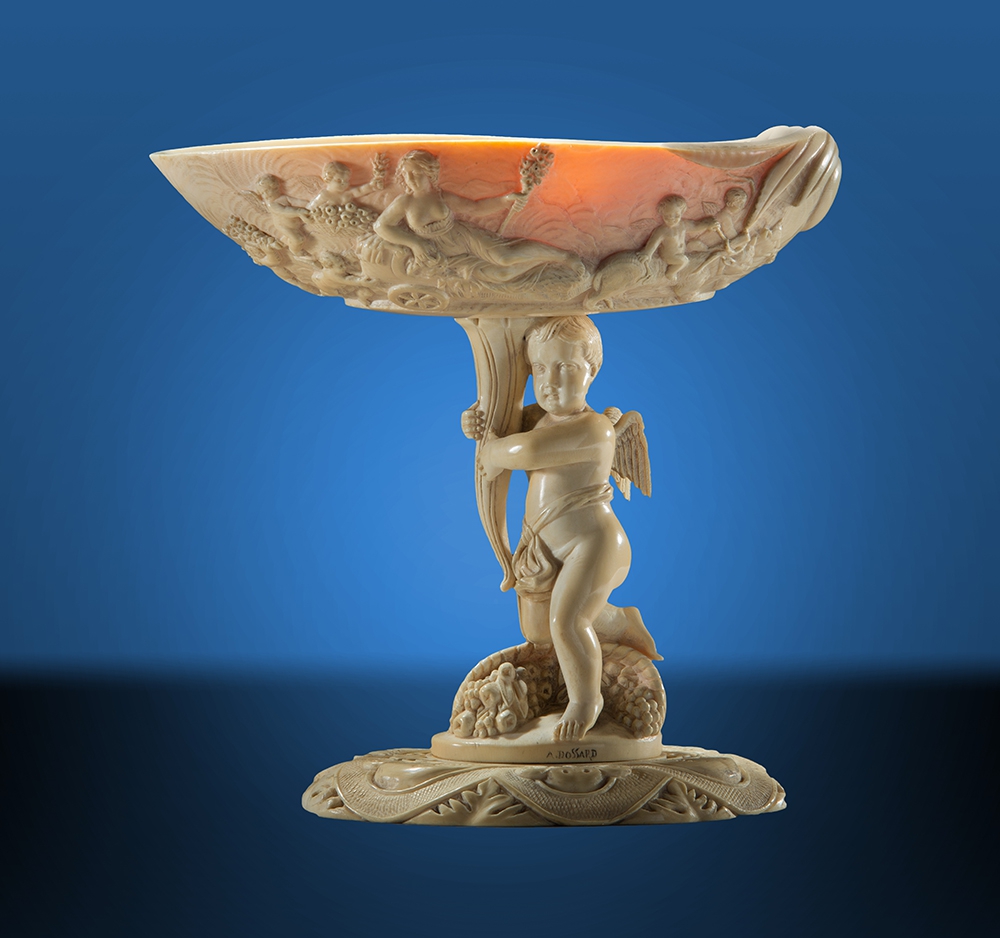 A. Bossard. Vase "Cupid and Venus in a Chariot". XIX century, France. Ivory

Olympus and the twelve gods seated on its top gradually switched to Roman mythology, changing their names: Zeus became Jupiter, Hera - Juno, Aphrodite - Venus, etc. Thanks to Ovid and Virgil, who wrote in Latin, ancient mythology survived until the Renaissance and in later translations served as a source of inspiration for Shakespeare.

The appearance of the gods and their inherent attributes have been preserved for centuries, with the spread of Christianity acquiring allegorical significance. So, for example, Flora, the goddess of flowers, became an allegory of spring, the goddess of agriculture Ceres - summer, the god of winemaking Bacchus - autumn, who embodied the north wind of Boreas - winter. Subsequently, the seasons themselves became an allegory of the main stages of human life - from birth to death.

The personified images of the gods of the Greek pantheon served later and for edifying purposes: significant Christian and secular doctrines were explained by the example of certain scenes. The plot “The Battle of the Lapiths with the Centaurs” (centauromachy) began to symbolize the victory of civilization over barbarism. Some mythological characters from the environment of Bacchus, such as the goat-footed Silenus, turned into devils - the inhabitants of the underworld. Favored by artists Louis XIV, the “King of the Sun”, identified himself with Apollo - the sun god and patron of the arts. Many painters conveyed the military and political victories of the monarchs as a triumph of the Olympic gods; quite often certain images were endowed with playful cupids.

Over the centuries, artists and sculptors created separate compositions and entire cycles based on mythological and allegorical subjects, relying on the pictorial tradition of past times, but at the same time developing new variations of the plastic solution of subjects each time. Titian, Rembrandt and Rubens were inspired by the history of Danai, Botticelli and Velazquez - the image of Venus, Brueghel and Boucher - an allegory of the seasons, and the masterpieces created by them became the adornment and pride of both public and private collections.

The main theme in the collection of Olga Zateeva presented at the exhibition is the disclosure of the allegorical plot “The Seasons” in engraving and objects of decorative and applied art. Gradually, the collection began to replenish with works created on various allegorical and mythological subjects. The choice of topics such as “The Four Elements”, “Four Parts of the World”, “Virtues and Vices”, work on the images of characters in Greco-Roman mythology make it possible to create an impression of what occupied the minds of artists from the sixteenth to the twentieth centuries.

The authors, whose work resulted in engravings presented at the exhibition, belong to a fairly wide range of European masters who worked in different techniques. There are works by Antonio Tempesta, Philippe Halle, Crispin van de Passet, Jan Sadeler, Adrian Collart, Alphonse Mucha. Using these examples, one can trace how the interpretation of the same plot by artists of the 16th – 20th centuries has changed. In the 17th century, a transition was made from a genre-emblematic, symbolic composition to a realistic depiction of the landscape. In the 18th century, a gallant scene arises, which in the 19th century was replaced by a genre one. In the modern era, the master gradually returned to the symbolic vision of the plot, often giving it different meanings and a philosophical interpretation.

Ivory items are the most curious part of the collection, as in the domestic museums mainly carved religious sculpture of the Middle Ages is presented; works of a later period are not available to the general public. However, at this exhibition you can see a variety of works on mythological subjects - the fruits of the labor of skilled masters of Italy, the Netherlands, Germany and France of the XVII - early XX centuries.

Porcelain, to which enthusiastic collectors have had a special weakness since the 18th century, is represented by small plastics, vases and individual items with amazing paintings that came from the workshops of Meissen, Berlin, Neapolitan and Vienna manufactories. Enamels of the 17th century and French bronze of the 18th – 19th centuries, which also feature mythological subjects, complement the variety of luxury goods.