The ideals of antiquity and the Renaissance were refracted differently in the art of later times. Realism and impressionism in the first half of the 19th century rejected both classical idealism and romantic idealism of the previous era. In the art of modernism and postmodernism, a new understanding of the topic “Nude” appears, where the distortion of the image of a person becomes a constant of aesthetics and a sign of harmony.

In modern Russian art, two tendencies in the image of nudity are inherited. One is based on plastic harmony, on the idea of ​​a form uniting fragments into a whole, the other - on freedom from everything, including the human image and body. Figurative art is largely based on a tradition dating back to the ideals of antiquity and the Renaissance, which are stylistically differently refracted in the works of contemporary Russian artists and sculptors.

“The picturesque expressiveness of Valery Babin’s works is akin to fragments of dreams that we remember fragmentarily, sometimes in bright color spots, sometimes in the images of our loved ones and not so, passing like shadows in memories of the past. About grandmother kneading dough early in the morning, bathers in a village rivulet, carts heading to the market, a milkman delivering milk to yards. Almost all Babin’s naked from there, from the memory of the past.. His time is eternity, an unshakable metaphysical category. It is here that the origins of a conscious escape from the unnecessary fuss of color and the detailed drawing of details. ” (G. Mazheykina, 2017) 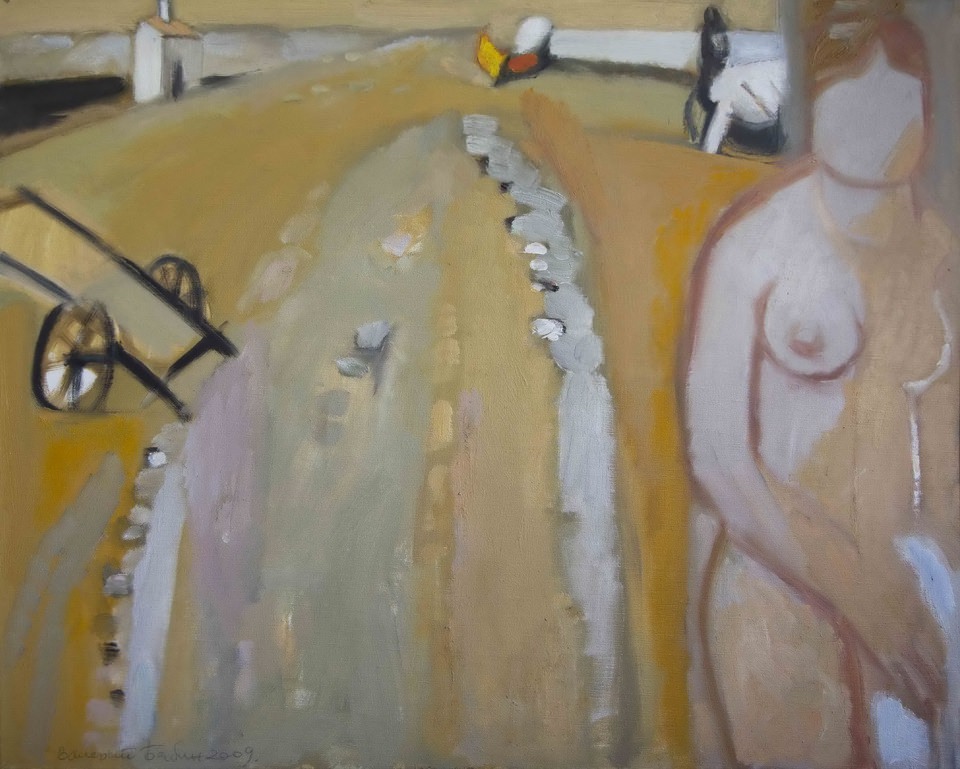 Valery Babin. On the Islands, 2009. Oil on canvas, 80x100 Courtesy of the East Meets West Gallery 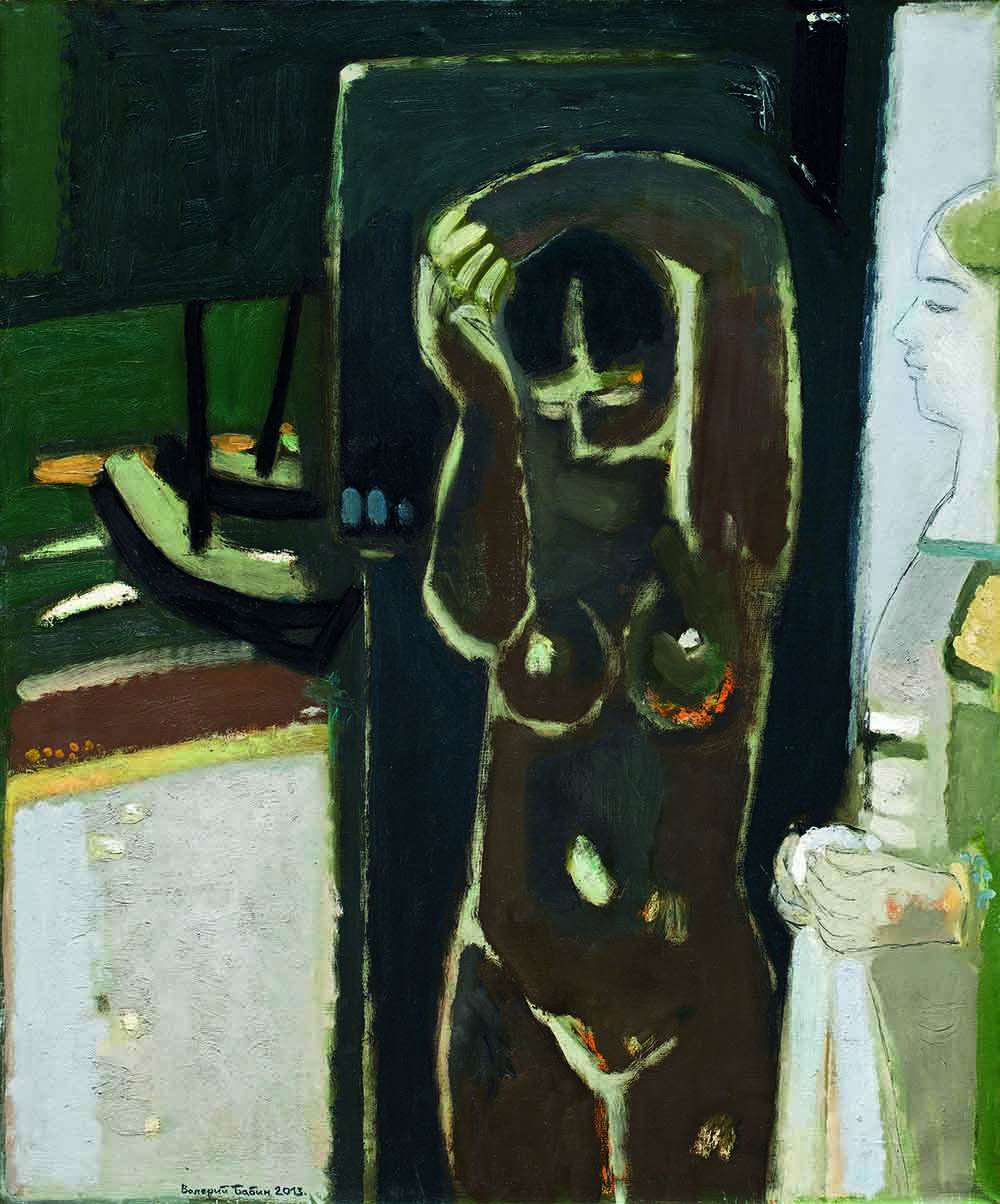 Dmitry Ikonnikov in his latest works again turns to the mythology of antiquity and biblical parables. “The artist creates a myth, and the viewer becomes a witness of this creativity, or, more precisely, creation. The finished works in this regard are almost as good as the artist’s energetic and expressive drawings, where mythological often often grows out of compositional intent. ” (A. Tolstoy, 2010). The new characters of his works on the biblical themes “Ulysses Awaiting A Fair Wind”, 2013, “Expulsion from Paradise” and “Peter and Andrei Catch Fish and Thomas Help”, 2016 continue iconic mythology, “… where eternal stories and personalities are bold and sometimes unexpectedly mate with the most burning modernity, which does not appear at all in the signs of today’s everyday life, but, first of all, in the kindest ironic attitude to life of the author and his heroes ”(A. Tolstoy, 2010). Gouache Ikonnikova on large color planes acquires the properties of oil with its game in translucent, glaze surfaces and various textures depending on the type of surface: its transparency, flowability or hardness.

Working only on paper, even within the framework of graphic drawing, he always goes on global topics of life and death, good and evil, love and hate. The author himself writes about it this way: “In fact, I do not paint pictures. I am engaged in plastic discussions about color, shape, line, plane, life, good and evil, meanness, love… ”D. Ikonnikov (2017) 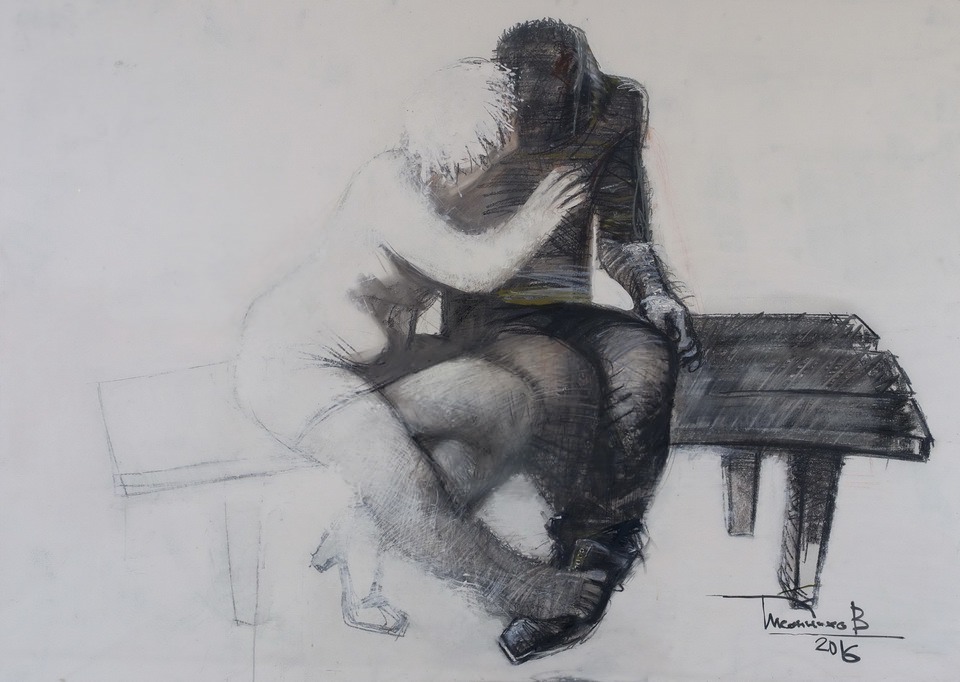 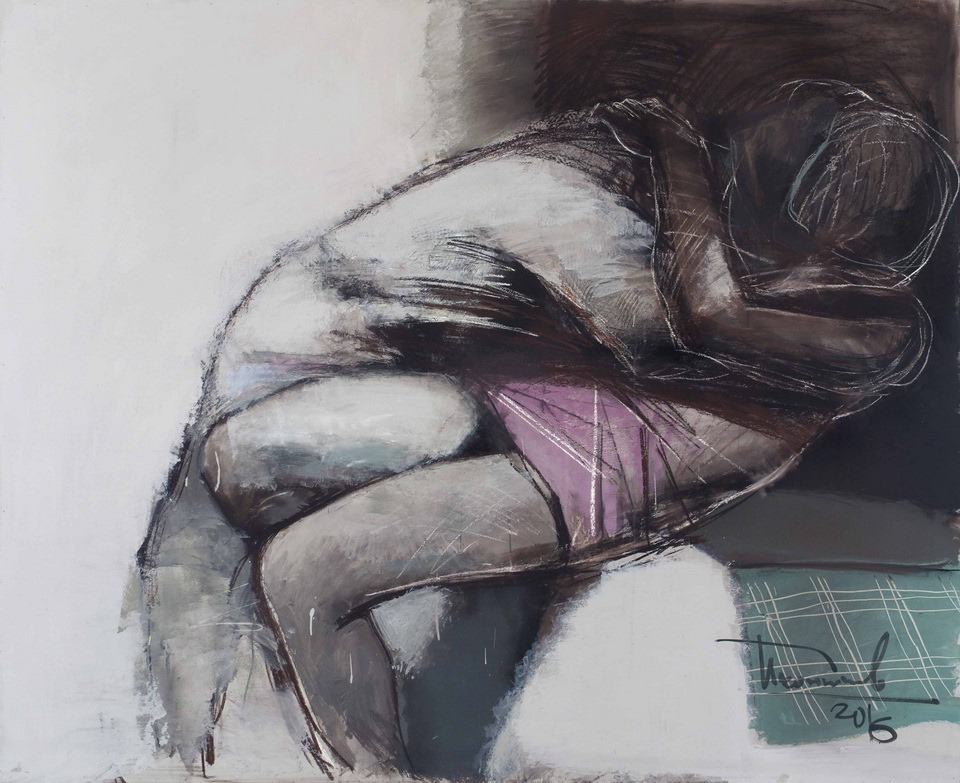 In the postmodern style of Igor Kamyanov, reality exists only indirectly, as a kind of “memory” of the event. The object itself is present, but here insignificant details, details go into the shade or are covered with a translucent veil.

Of course, in his painting and graphics, within the framework of the topic of nudity, fairly clear outlines and even some “hints” on the details of the human body are visible, however, the author himself is not present here as the subject of this image. “The reality of modernist and postmodern painting is paradoxical in the sense that, abandoning the idea of ​​the subject as its main theme, this painting can still create vivid, aesthetically attractive images. And the paintings of Igor Kamyanov are another confirmation of this conclusion. - Exquisite work with light, immersed in the nuances of light shades, very peculiar - “soft” - a sense of space, laconicism of images - all these qualities make Igor Kamyanov’s works vivid works of modern painting… ”(S. Ivannikov, 2012) 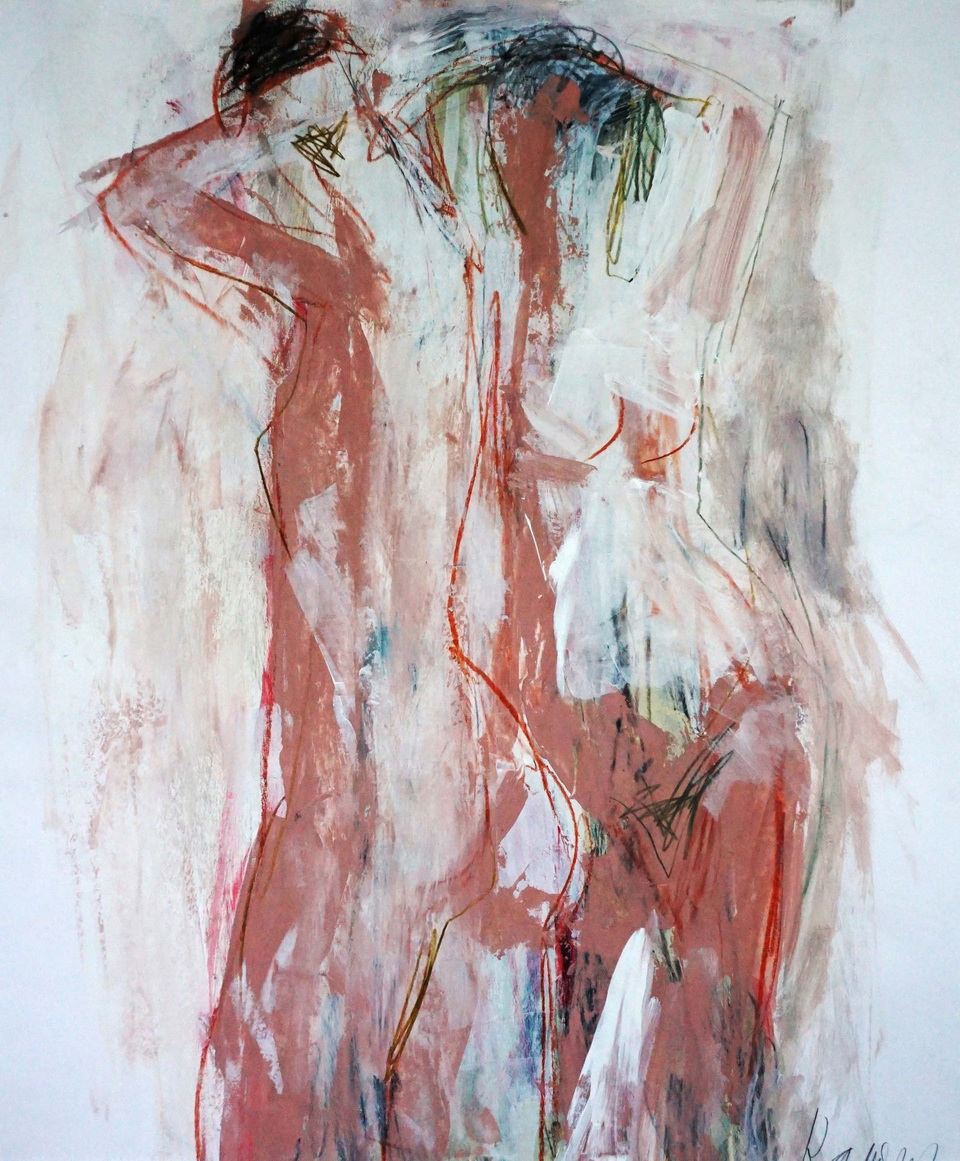 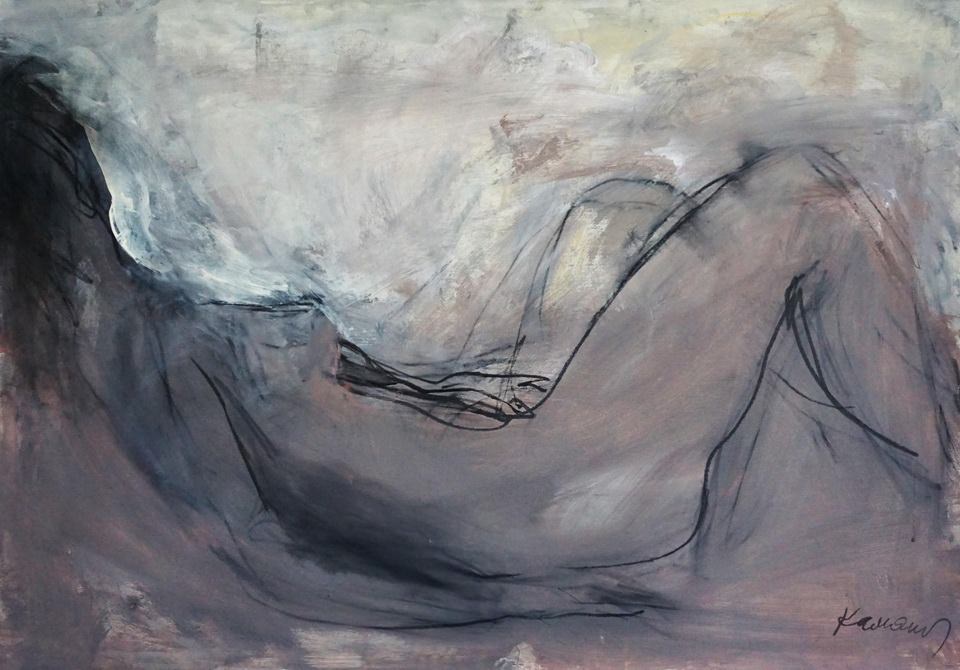 “In the figurative plots of Nikolai Krutov’s paintings, his immersion in the canvas space as a field on which the drama of his heroes is played is read. Very often the plots of his paintings resonate with the dramaturgy of the epic of the ancient tradition. His "Bather" free pose and immersion in the natural world, perhaps something elusive connected with the world of Gauguin. "The Courtesan of the Moulin Rouge" - with the world that Lautrec so loved to write. A reference to Leger or Picasso is an attempt to dialogue with them, an attempt to learn the secrets of their artistic expressiveness in images, to speak on equal terms. After all, this is the only way to open the veil of the mystery of creating an image. ” (G. Mazheykina) 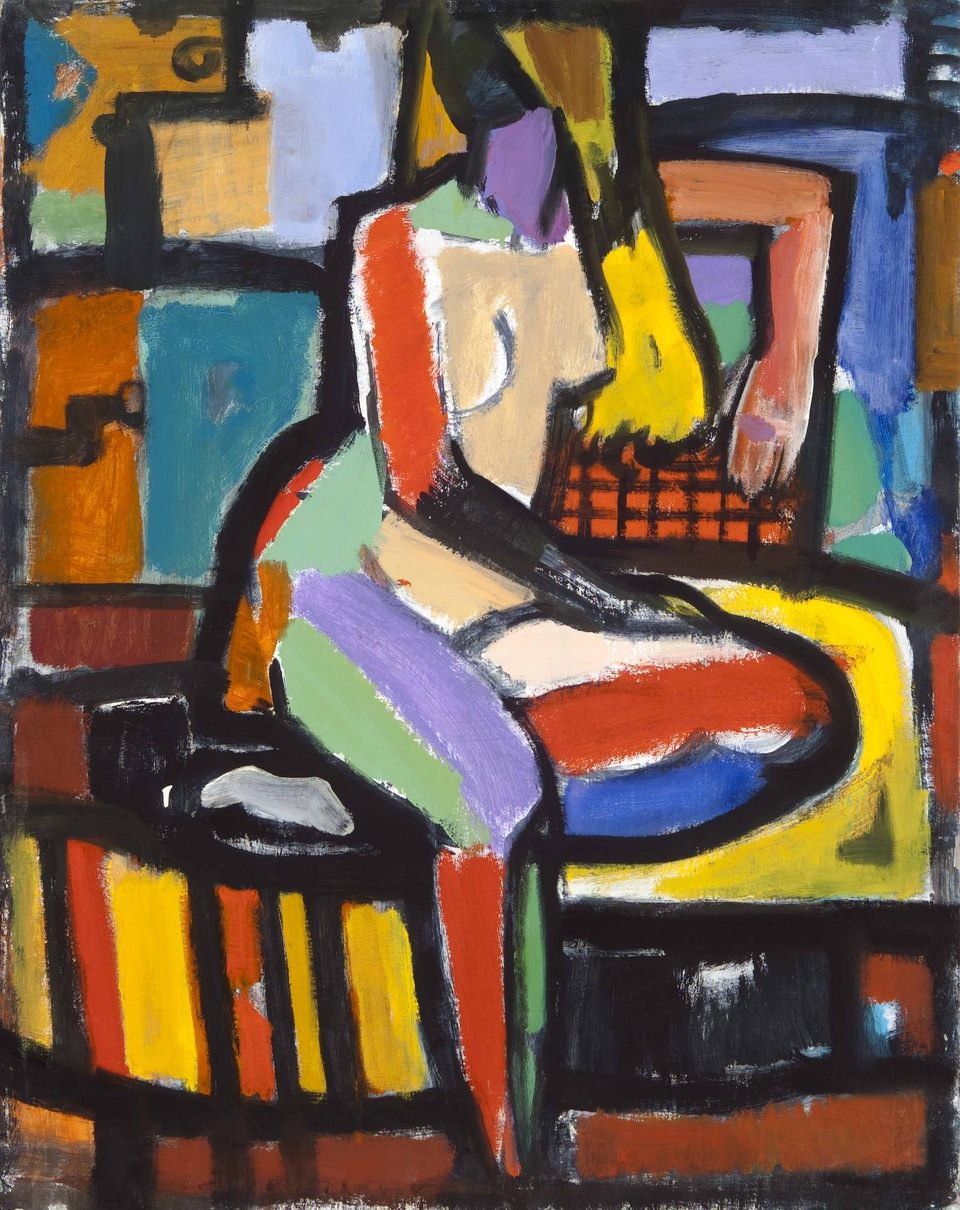 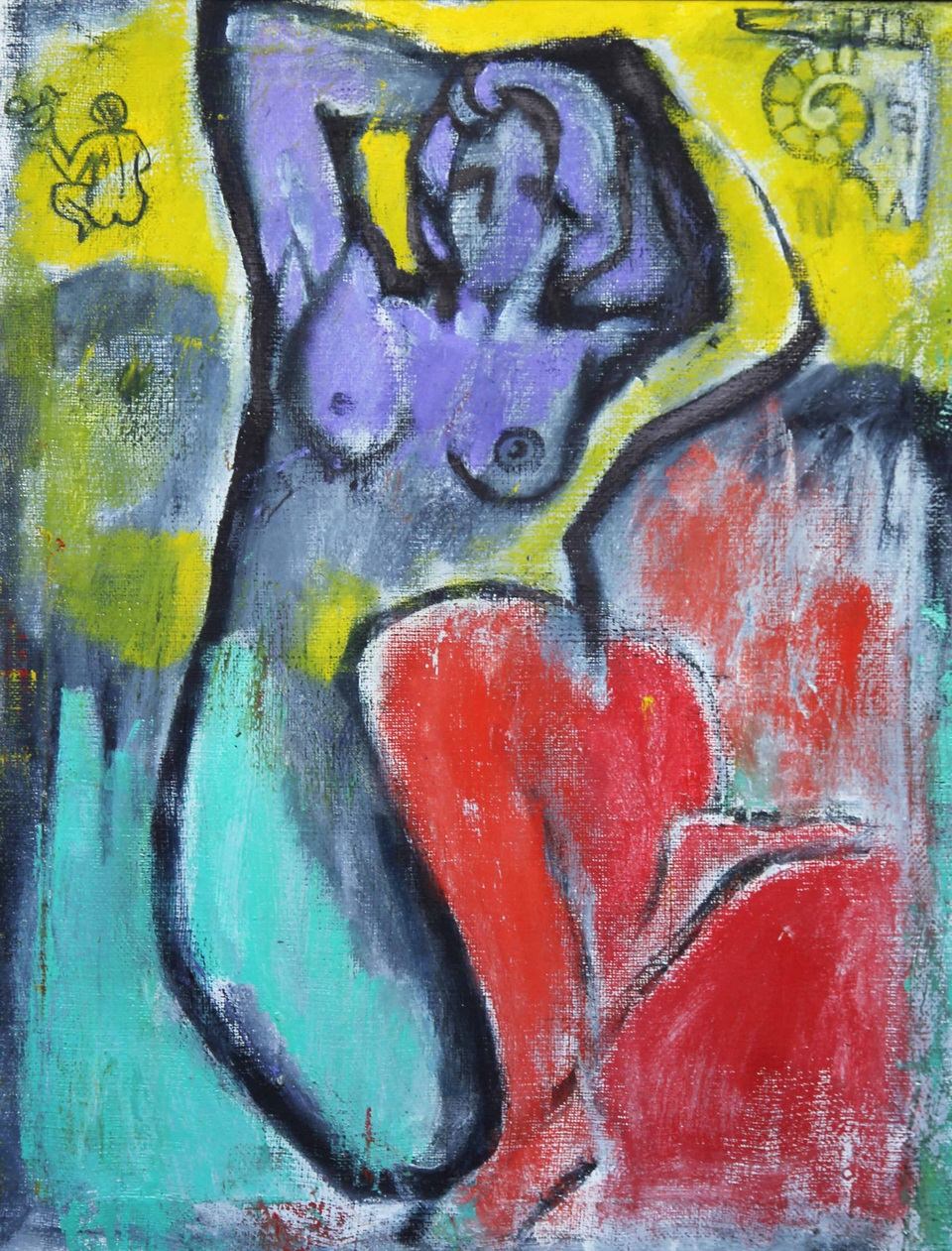 The main objects of Karina Nazarova ’s work are the image of a person and his environment. Over the years, she seriously delved into a spiritual topic that is connected with her sincere religious feeling, explored the topic of “humiliated and offended”, the festive element of bohemia, the theme of old age and female loneliness, and many others. But she had never before touched on the topic of nudity. And so it happened. The work “Egon Schiele and His Models” in 2016 seems to be even painted in a manner reminiscent of an Austrian artist of the early 20th century. It’s not just a large canvas painted - a genre mural with large figures by Egon Schiele, his girlfriend until the end of his short and tragically ending life at 28, his wife and the models that the artist painted. She concentrated almost all the components of Karina Nazarova’s creative style in recent years: “… a catchy expression of the composition, a sharp plastic contrast, a thick and dense mix of paintings, as if synthesizing the monumentality of an ancient fresco, and a lively rough, secret manner of the Moscow school of painting and the earthly simplicity of poetry“ severe style. " (N. Ivanov, 2015) 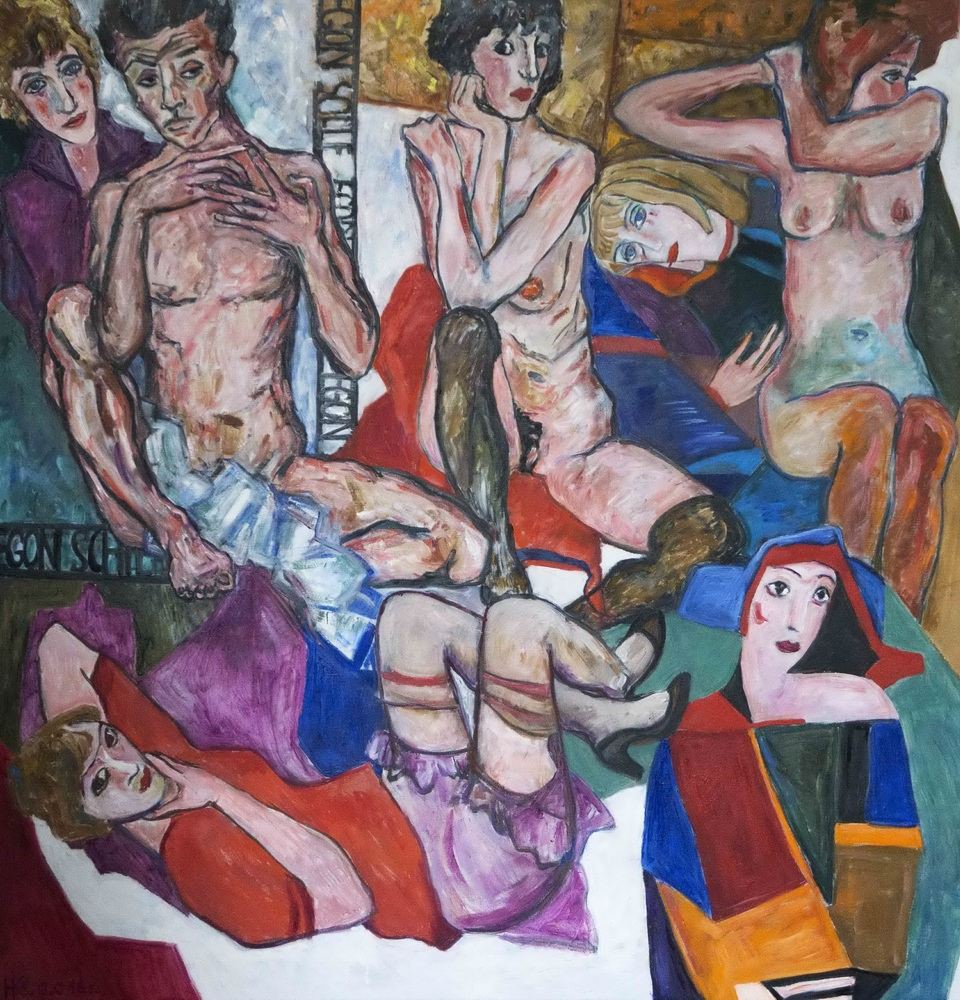 Anatoly Purlik in my memory has always been "carried away" by the theme of nudes. But over time, he moves from the “Cezanne” cute images to a more complex world, where next to beauty and harmony there is a world of pain, despair, deformation. “Nudity of the body becomes ritual. It opens the magical world of feelings, each of which colors reality or part of it in its own special color of heat or cold. Anatoly sees and depicts the innermost shadows of souls, freed from mediocrity, bias, cunning game or arrogant defense ”(S. Tarhanova, 2011). All art historians note the unusual symbolic meaning of color in the works of Anatoly Purlik. It often seems that it is not the line that forms this or that image, holding it within the borders, namely the color. So, the greenish shades of the body of “Capitoline Flavia”, 2017 together with its monumental body add to the image of weightiness and this very monumentality, and the “incorporeality” of its “Playful sailors. Yalta, 2016 ”appears even brighter, thanks to the expressive frame of yellow-red-blue cheerful beach life. 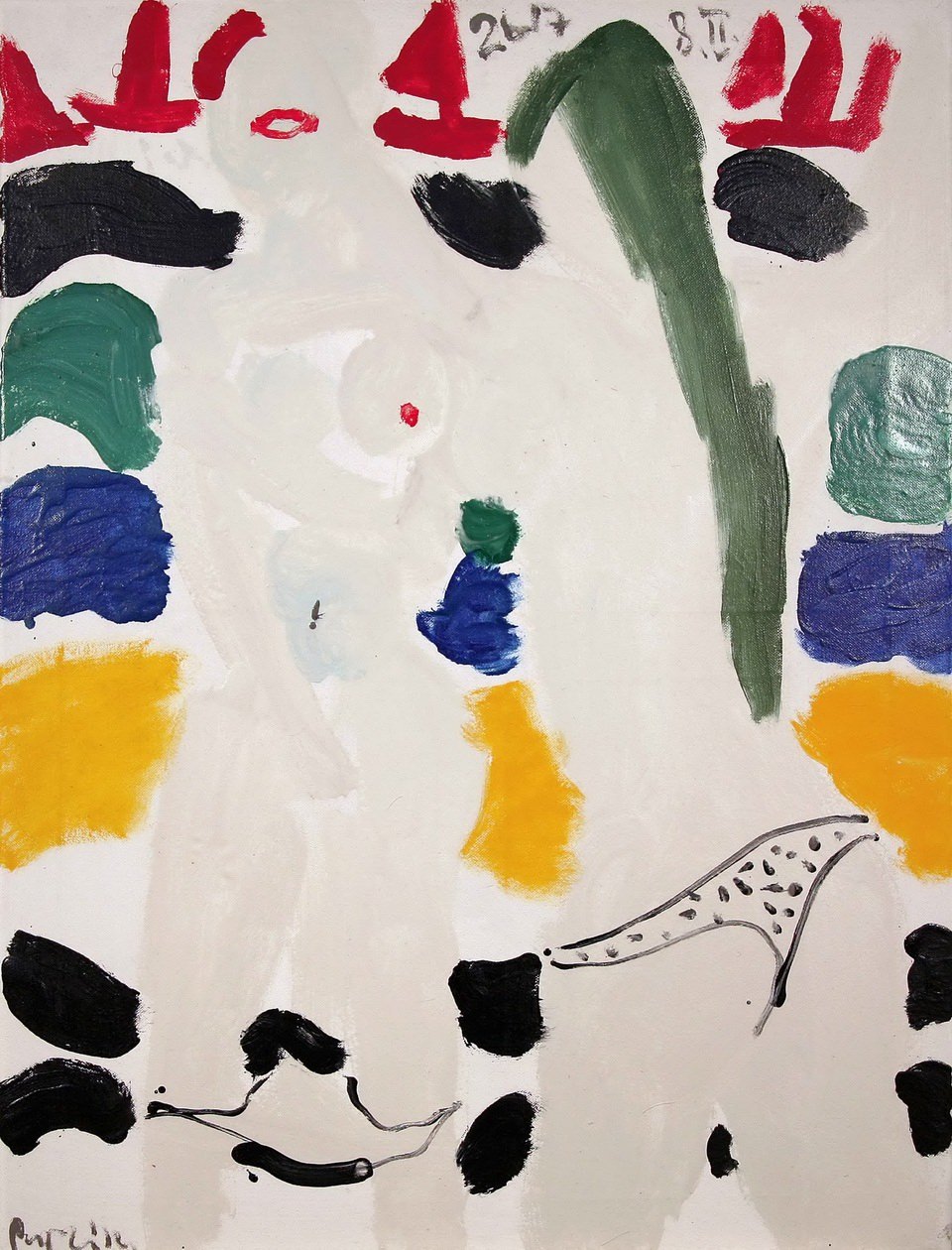 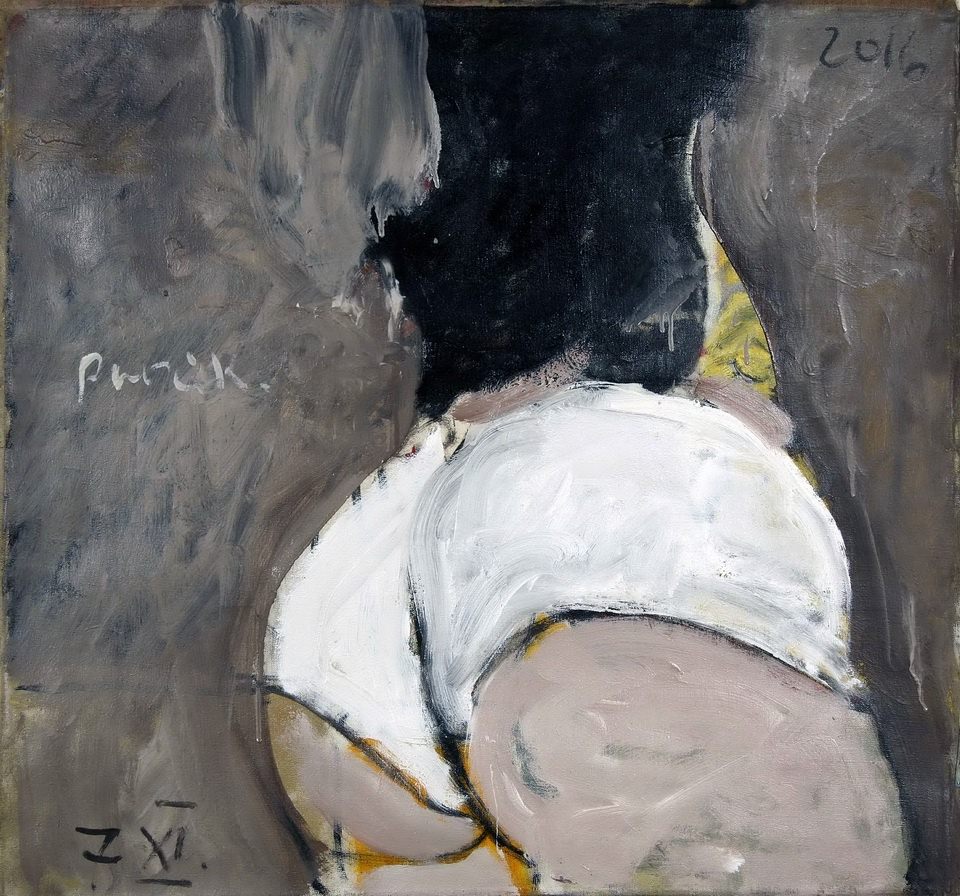 Anatoly Purlik. Do not think about seconds down… 2016 Oil on canvas 75x80 Courtesy of the East Meets West Gallery 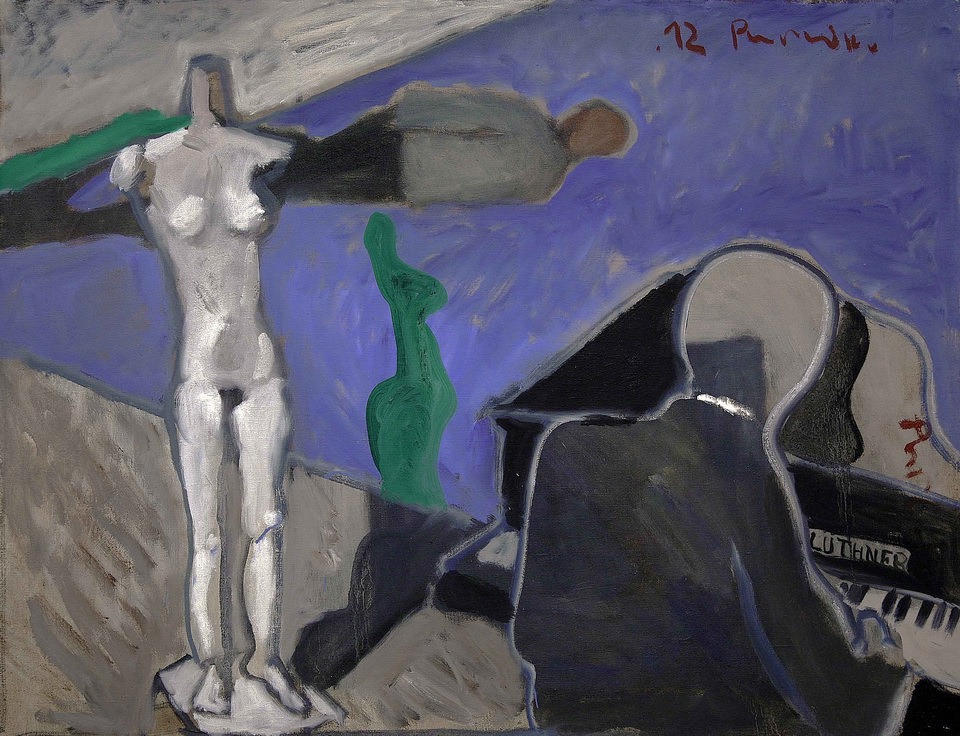 Mikhail Tikhonov “From 2008 to the present day, large-format works,“ Big Nudes, ”began to be born in me. The name of my solo exhibition in the Small Manege in Moscow in 2010 “Nile, Tiber and Euphrates” was also the name of the whole cycle of these works… I chose these three names as a metaphor for this cycle of three-figure compositions. The female figures depicted in these works were for me the elements connecting the top and bottom of the architectural space of the canvas, where the solid is the drawing, and the river, the elements are the movement and the surface of the canvas itself. "I consciously build my compositions under certain conditions, when female figures are deployed inside the canvas, so I try to solve the problem of space, in which the main event takes place in the depths, as if behind the surface of the canvas and is facing the viewer." (M. Tikhonov, 2010). A black and white version of the work, where the author works on canvas with graphite, he consciously selected. So he wants the most minimal means to present the viewer the beauty of a female figure, the poetry of her posture.

The new graphics in the theme of the nude of Mikhail Tikhonov, it seems, does not differ much from the works of a decade ago. According to V. Patsyukov, “The imagery of the artist’s plastic presence seems to soar above the horizon, it is absolutely devoid of gravity and really, most likely, belongs to heaven than earth…” 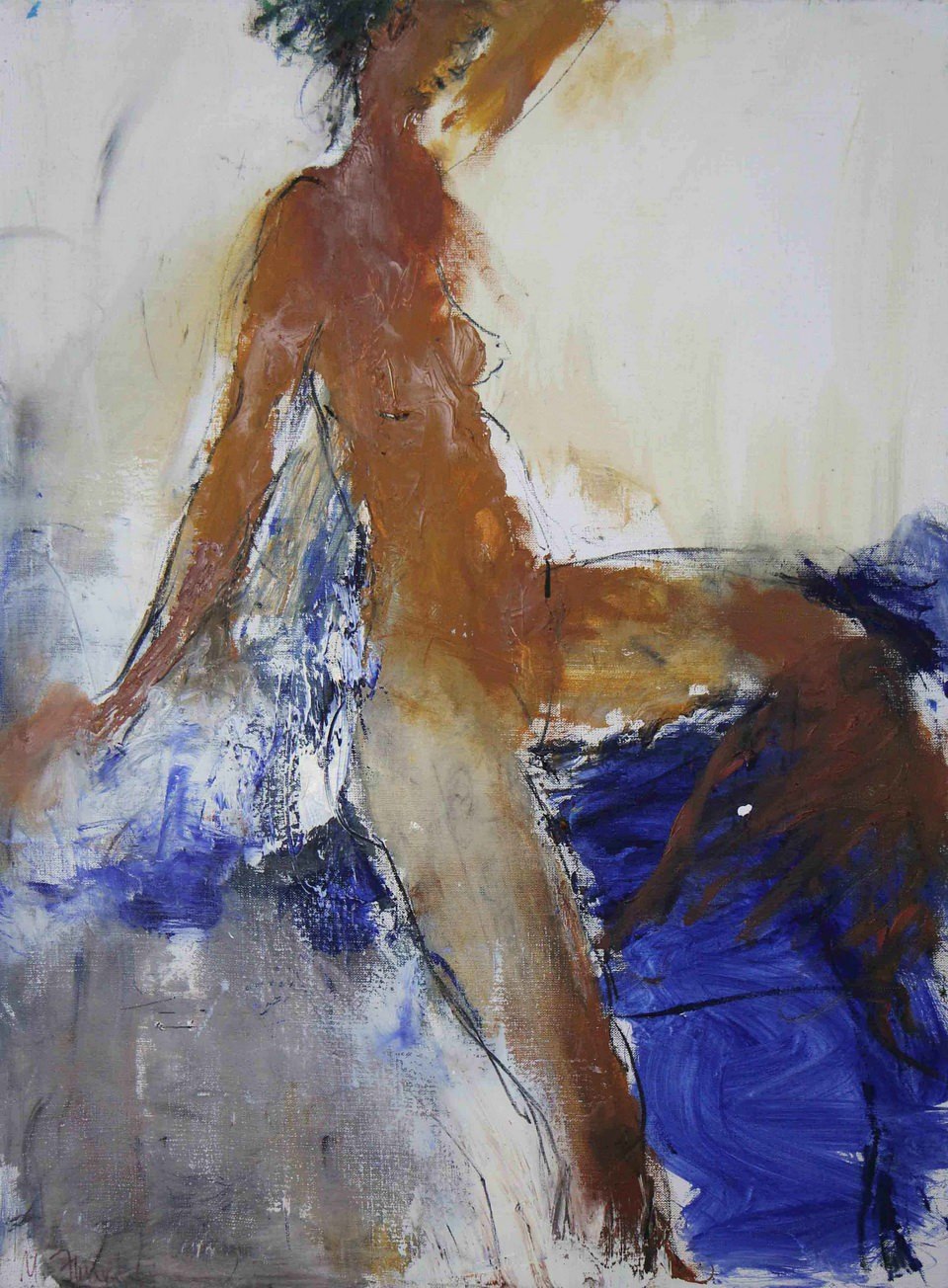 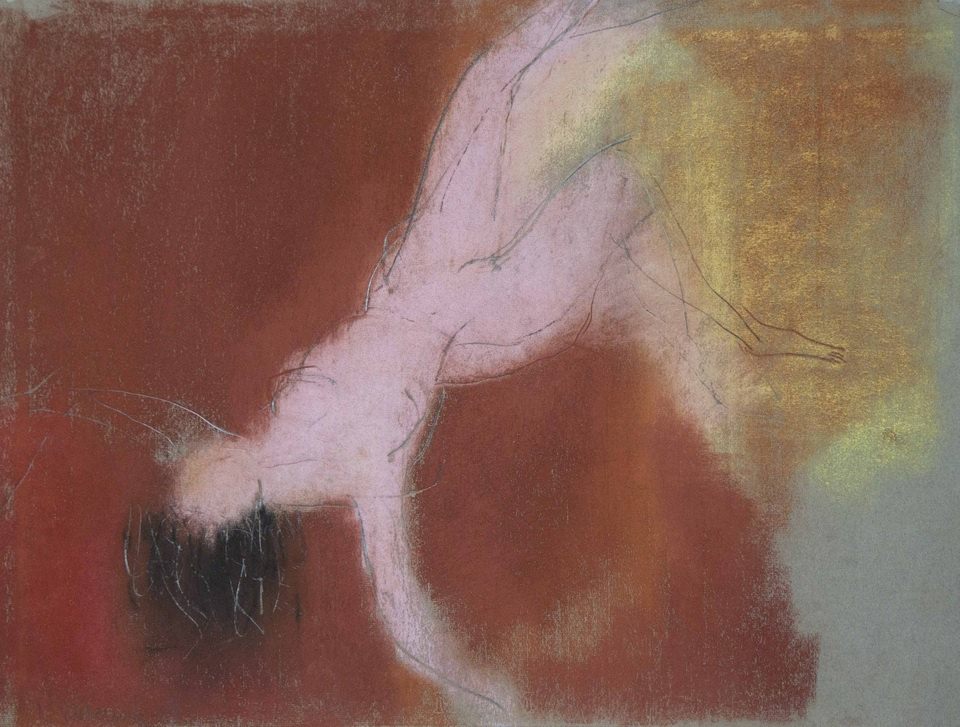 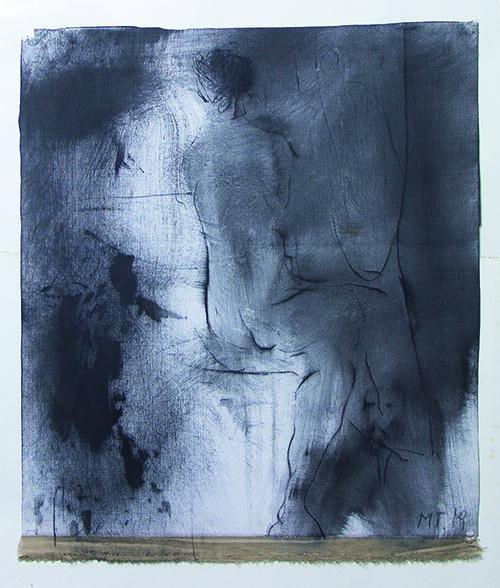 There is so little in common in the presented unique works of our authors, but we found the foundation that was able to collect them not only in one exhibition space, but also in the theater of our modern life: they preserve the bodily image of a man for us all, women, men, - not that important. So, for now, it’s too early to say that in Russian art the artist’s interest in the magic of the human body disappears.