Exhibition of Evgeny Danilevsky "About Russia with a wide brush"

November 28 in the gallery "Belyaevo" Association "Exhibition Halls of Moscow" will open the personal exhibition of Eugene Danilevsky "On Russia with a wide brush", dedicated to the 90th anniversary of the artist.

People’s Artist of Russia Evgeny Ivanovich Danilevsky (1928–2010) - student of the famous Moscow painter Academician P.I. Kotov. He graduated from the Kharkov Art Institute (workshop of battle painting). From 1962 until the last days he worked at the Studio of military artists named after M. B. Grekov. The author of numerous paintings on historical topics: “The Battle of Kulikovo”, “Dmitry Donskoy”, “To the Field of Kulikov”, “The Tsar”, “Ivan the Terrible takes the British Embassy”, “Triumph of the Poltava Victory”, large-scale dioramas: “Storming of Berlin”, “Capture of the Osa Pugachev fortress”, “The assault of the Izmail fortress by the troops of Suvorov in 1790”, “Counterattack near Moscow”. He took part in the reconstruction of the Borodino panorama of F. A. Rubo, was awarded the gold medal of the Academy of Arts and sent on a creative trip to Italy, from where he brought a series of expertly executed landscape studies. 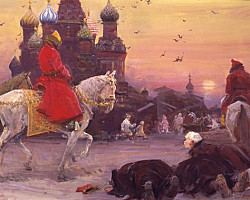 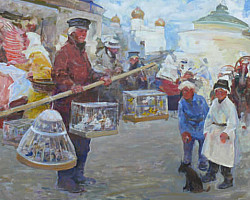 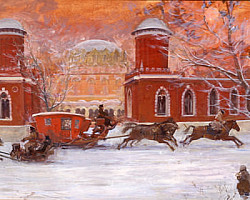 Along with historical canvases, sketches for military-historical dioramas for the memorial complex on Poklonnaya Hill, landscape sketches of different regions of Italy, the exhibition in the Belyaevo Gallery will feature genre paintings dedicated to old Moscow - Seller of Birds, Petrovsky Palace in XVIII century ”, self-portraits of the artist, portraits of family members and close friends, still lifes, as well as a series of“ Polenovsky places ”, revealing the artist as a subtle lyric master who worked in the best traditions of Russian living Pisnya school.