Symbiosis of cultures through the eyes of a modern European photographer.

From November 7, 2018 to January 13, 2019, the Classic Photography Gallery will host an exhibition of works by the rising star of French photography Alex Perret. In the Great Hall of the gallery will be presented several series of works created by the author from 2011 to 2018. From the colossal volume of material, the author selected the 70 best shots, which he will present to the audience.

Perret was born in France and seriously took up photography after graduating from Paris University of Est Creteil, leaving for Argentina. Absorbing the energy of the places where fate threw him, the author expanded primarily his own visual horizons - Jerusalem, Portugal, Colombia, India, the Middle East, Russia: unusual geographical combinations gave rise to the same unusual project ideas. It would seem that between the countries that attracted the attention of the author, there is a whole chasm in terms of differences in climate, composition of the population, the foundations of everyday life and cultural traditions. Nevertheless, the author was able to discern in these often conflicting worlds something common that unites all people, regardless of wealth, language of communication, national and religious affiliation. This generalization criterion turned out to be simple human emotions, characteristic of all representatives of the human race beyond any social, economic or confessional labels.

“Photography is a life position for me,” says the author, “I am incredibly subjective and biased in visual statements. In my works, I try to repeat the emotions that opened up to me and show that, in addition to the differences, we humans are all a bit the same. ” 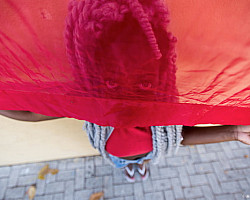 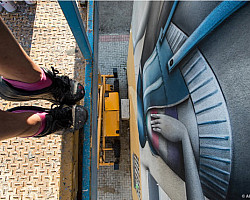 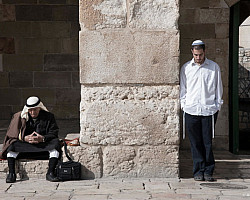 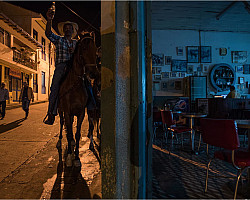 Each of his works is a crossroads of its kind, where there is a clash of realities of different social and cultural properties. An individual individual, a group, or a more general worldview paradigm in this respect is of interest only in comparison with other alternatives, that is, as part of the global space of the noosphere.

“The protagonists of Perreux’s works are not only the people in the pictures, but also their environment, saturated with bizarre details and bright colors. Heroes of Parré are not only inhabitants of cultural crossroads, but also a medium of collision of opposing worlds, which forms such unusual examples of cultural symbiosis. Moreover, it is this symbiosis that determines the flexible nature of the Perret method, where textbook techniques and new representations form a hybrid integrity of the art form, ”notes the historian of photography Artyom Loginov.

The social intrigue of the project remains open, allowing the viewer to independently figure out what the ending of the action stopped by the photograph might turn out to be. Nevertheless, the author does not hide his optimism about the probable resolution of the problem he raised.

1. The rising star of French photography
Alex Perret is one of the most promising new-generation French photographers. In a creative sense, he inherits the great humanistic tradition of world photography of the 20th century, the most prominent representatives of which are such grandees as Henri Cartier-Bresson, William Eugene Smith, Robert Duano, Harry Gruyere and others, bringing to it the relevance of the present.

2. Focus on the beauty of everyday life
Alex’s focus is on the unexpected beauty of a person in everyday life. Taking pictures of people in difficult life situations, he is mainly interested not in acute social problems, but in the symbiosis of dissimilar cultures.

3. “Captured”, not posed situations and images
Perret’s photo does not tolerate productions wherever he works - in Europe, America or the Middle East. His extremely biased and subjective view of life in Russia does not imply a certain one-dimensional characteristic. City sketches made by him in Moscow and in the provinces convey a sense of reality and fluctuations in reality, which probably are the main sensations from a country with a difficult fate, and these sensations are characteristic not only for foreigners.

4. "Chip": two plots in one frame
A characteristic feature of Perret’s work is the simultaneous presence of two scenes in the frame. In this case, the author shares them with a physically existing line, a figurative or literal boundary of the environment and meaning. As a result of this, each of his works is a crossroads of its kind, where there is a clash of realities of different social and cultural properties. An individual individual, a group, or a more general worldview paradigm in this respect is of interest only in comparison with other alternatives, that is, as part of the global space of the noosphere.

5. The photographer drove in search of a frame of 76,000 kilometers
Over the past few years, Alex has been actively traveling the world and taking pictures of the daily life in which he lives, and in which most of us live. In search of inspiration and images, the photographer has already traveled over 76 thousand kilometers.