PAVEL PEPPERSTEIN "MAN AS A FRAME FOR LANDSCAPE"

The Garage Museum of Modern Art presents an exhibition of Russian artist, writer, music performer, art theorist Pavel Pepperstein (b. 1966, Moscow). Pepperstein, from the very beginning of his artistic life, the starting point of which can be considered childhood in the circle of Moscow conceptualists, is one of the most active myth-makers of contemporary Russian art, the inventor of systems, universes, new languages, cities and political projects. The personal exhibition at the Garage Museum is an attempt to fully “inspect” the most visible and influential myths created by Pepperstein at different times - from the 1970s to the present day. From the invention of new countries and states with detailed cartography, attributes and the like to ecstatic or, conversely, over-thought visions of the future world, from religions, cults, beliefs and rituals to alternative realities that exist in parallel modes and modalities. 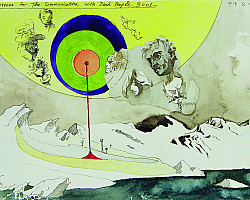 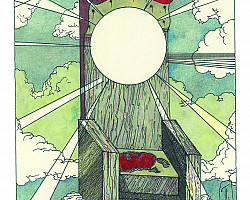 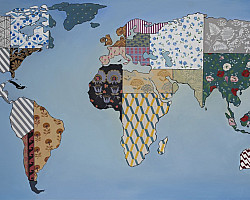 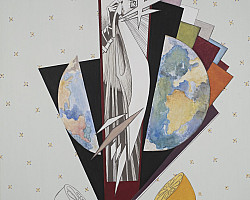 The exhibition is a sequence of rooms, in each of which one of such landscape systems develops and lives - for example, the “Library”, assembled from books invented by Pepperstein that cannot be opened, the viewer sees only the roots of publications. This is one of the most important images for Pepperstein and the Inspection “Medical Hermeneutics” group founded by him together with Sergey Anufriev and Yuri Leiderman - the pantheon of European civilization in which Aristotle, Leibniz and others are replaced by new characters with pseudo-canonical texts. An important place at the exhibition is given to the so-called political discourse - on the one hand, the reinvention of the political system, on the other hand - giving the very real actors of modern politics a symbolic status, immersing them in the schizoid space of new utopias, in the arrangement of metahongostates of the new world. Pepperstein began this “state activity” in the 1970s, when he conceived and described in detail the utopian countries and political systems: the “Garage” will show for the first time the early drawings and albums made by Pepperstein as a teenager.

Throughout the exhibition, where there is a place for theatrical and theatrical architectural solutions, there are several cross-cutting elements, in particular various ornaments, rapport, which, as in the practice of Moscow conceptualism, is not thought of as a simple "decoration". For Pepperstein “purely decorative betrays the loss of its origin, it does not have a genealogy, orphans. Thus, it refers to a perfect separation from the context ”(Jacques Sulliu). A game with different levels of layered reality, the discovery of magic, strange narratives between the folds of reality drive the entire exhibition, turning it into a collection of amazing "landscapes", as in one of Pepperstein’s series, which gave the name to the whole project.

For “Man as a framework for the landscape”, the artist will also create about 20 new works, including graphic works, videos and installations. In addition to the exhibition will be released a book of memoirs of Pavel Pepperstein.

The exhibition was organized with the support of the Aksenov Family Foundation.