SOCHI. The next season of the science cinema festival has started.

The scientific film festival FANK is being held in dozens of Russian cities for the second time. Its format involves the demonstration of films not only in cinemas, but also in universities on the terms of a social franchise (free of charge) and with the possibility of choosing any picture from the festival catalog. The goal of the Funk is to popularize copyright documentaries on science, relevant, informative, encouraging a closer interest in this area. The program includes “films” collected at the Sundance, International Documentary Festival of Amsterdam, Tribeca Film Festival, Berlinale. 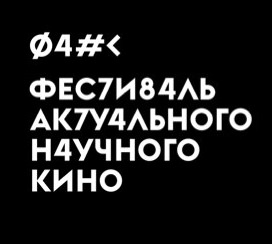 The festival started in mid-October in Sochi, and will end in December. Even at the first stage, the jury decided to mark Hillman Curtis’s “Happy Film” award, which was established this year. Attempts at a successful, heroic profession, to find the source of trouble-free happiness, lead him and the audience to paradoxical conclusions and gaining useful experience. The French film "In Limbo" by Antoine Vivani explores the degree of the Internet’s invasion of everyday life and the consciousness of modern man, the danger, advantages and prospects.

“Sugar” (That Sugar Film) Damon Gamo (Damon Gameau) - an occasion to once again think about the safety of their own diet, imposed by advertising or compiled in accordance with good intentions. The "delicious cachet" of scientific films allows you to peer into their contents. To think about the reasons for the disappearance of rare animals during the “Racing Extinction” of Louis Psihoyos, to hear the warning in the film “Terra” by Jan Arthus – Bertrand about the negative impact that naturelessly invading its secrets can have on nature person. The jury of the current FANK was renowned biologist from Krasnoyarsk Yegor Zadereev, professor at the University of California Eduard Frenkel, director of Sensual Math Ekaterina Eremenko, journalist Alexei Paevsky.