On May 26, the X Anniversary International Festival of Fine Arts “Traditions and Contemporaneity” began to work in Moscow. In 2016, the Central Exhibition Hall "Manege" presented the work of more than 300 participants from more than 40 countries. The main idea of ​​the festival “Traditions and Contemporaneity” is to show the whole palette of world art in the field of painting, drawing, sculpture and applied art, to collect all the trends and directions of modern culture in one exhibition space, to bring the art of different countries and peoples closer, to present original works that reflect national traditions.

“Mikhailov Gallery. Russian Jewelery and Antiques ”presents the works of contemporary Russian jewelers and a rich collection of antiques. Mikhailov Gallery is a regular participant in many international projects, and is also one of the few companies representing Russia at international jewelry and art exhibitions, such as BASELWORLD, Inhorgenta Munich, ART MONACO. Currently, the company is giving priority to the development of the antiques industry, which in the very near future promises to develop into an independent Gallery Antique brand.

Within the framework of the festival “Traditions and Contemporaneity”, “Mikhailov Gallery” will present a collection of impressionist landscapes by Russian artists belonging to the era of Socialist Realism. The basis of the collection is the best paintings of the most prominent representatives of this trend - landscape lyricists N. N. Galakhova, I. V. Suvorova, O. S. Gadalova, A. S. Efimova, S. I. Smirnova, and A. N. Semenova Landscapes that caress the souls of the audience are filled with naturalness and lyricism of emotions, a craving for nature. In the USSR, such art was subjected to consistent discrimination. * Artists presented at the Mikhailov Gallery stand entered art on the wave of the “Khrushchev thaw”, their work does not carry aggression, the paintings are ambiguous and associative, and this is no coincidence, because they are all representatives of academic education, are representatives of various Unions of artists, repeated participants in many republican, union and international exhibitions. The works of these painters are presented in the largest museums in Russia, in private collections of not only compatriots, but also foreign collectors. A separate line should be noted the picture "Mother and Child" of 1943, made by a native of Ukraine - Afanasyev Vasily Andreevich, a Soviet and Russian artist who defended his thesis on "The Partnership of South Russian Artists (1890-1922)", a doctor of art history, the author of many publications on Odessa artists.

The X Jubilee International Festival of Fine Arts “Traditions and Contemporaneity” will last until May 31, 2016, a collection of paintings by the most prominent Russian artists of the era of Socialist Realism is presented at stand No. 19 of the Mikhailov Gallery company. 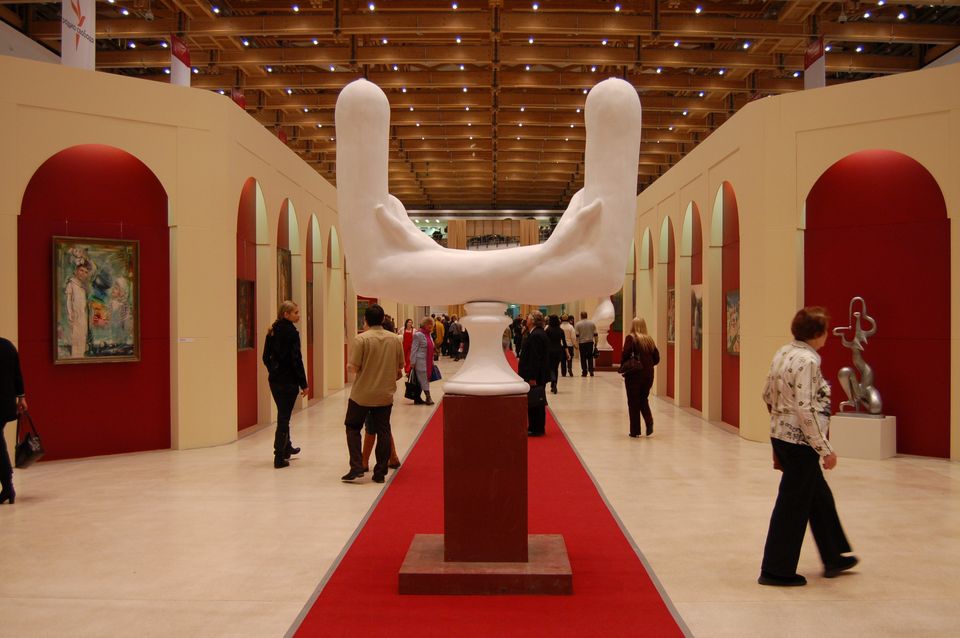 * For the power of the USSR in art, starting from the 1920s, the criterion of "thematism" became decisive. Thematic canons of Soviet art originated with the Leninist plan of monumental propaganda and were fully formalized in the practice of thematic exhibitions. Such topics were: historical-revolutionary, the theme of labor with the development of industrial-urban motifs that symbolized the "socialist reconstruction" of Russia, the plots of the "new Soviet life", "The image of a new person", in particular the portrayal of the heroes of the revolutionary struggle "recognized by the party and people" and socialist construction. The hierarchy of the genres of fine arts was revived, and “social orders” became the leading and officially encouraged. In such a public atmosphere, the peripheral genres — still life, landscape — seemed suspicious if they did not serve to propagate the system, such as the “industrial landscape” of another hydropower plant.

The complexity and drama of such a socio-artistic situation consisted in the fact that the tradition of Russian impressionism driven from above, despite everything, almost clandestinely continued to develop in the bowels of creative practice for decades. As early as the mid-1930s, these adherents of lyric-chamber painting were harassed as “Marcists”, emphasizing their dependence on the “fashionable foreigner” Albert Marche. This analogy was carried out in connection with a craving for nature and its visible forms, an attraction to plein air, color, light, attention to the shades of the subject’s private life, and a desire for a lyrical chamber of expression. According to a long tradition, a Russian artist sees himself more in a picture of nature than in loud public rhetoric.

Artists rediscovered Russian impressionism entirely behind the walls of noisy thematic vernissages. Thus, one of the paths of Russian impressionism in the 60-70s did not go through officially thematic genres, but through portraits of loved ones, sketches, “nudes” and landscapes. It is these genres that are at the forefront of the artistic life of the thaw era.