Exhibition of paintings "Madam" by Irina Ryabinova and Arthur Molev

This is a joint project of artists Irina Ryabinova and Arthur Molev.

The exhibition project is an attempt to cognize the female image outside space, outside time. Ma’am - departing, coming and eternal. Immediate and crystallized image. Playing and disappearing.

A modern man in the maelstrom of life often cannot adequately turn to a woman. We suggest recalling the ancient word KIT. And we consider this image from the point of view of a woman-creator and a man-creator.

The project participates in the Sergey Kuryokhin competition in the field of contemporary art. 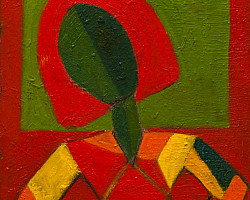 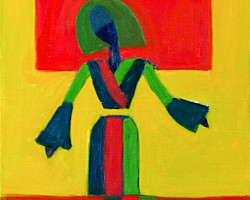 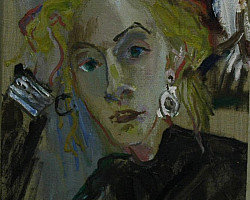 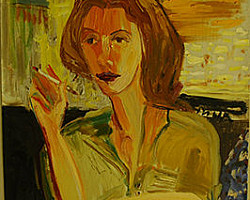 The artist’s worldview was formed in the violent 90s, among the post-Soviet underground. Eagerly absorbing the culture of a unique city, she plunged into the atmosphere of unbridled creativity that prevails in the famous Rock Club on the street. Rubinstein and later on Pushkinskaya 10.

Participation in the avant-garde projects of the LEM theater, provocative exhibitions, cooperation with the S. Kuryokhin Center for Contemporary Art and the SKIF international festival - all this largely explains the richness of the palette and the emotional expressiveness of Irina Ryabinova’s painting.

The paintings are abstract and suprematist painting. The legacy of European impressionists and Russian avant-garde artists had a direct impact on the formation of the artist’s creative style. The master feels equally free in various formats: from miniature to monumental. Saturation of colorful combinations, juiciness and liveliness of the smear, freedom of composition are characteristic features of the creative method of Irina Ryabinova.

The artist attracts attention with self-confidence, intense rhythm and aggressive pressure. Color dissonances make up their own harmony, the deformation of landscapes and people seems to be a concentrated expression of characteristic features. Ironical dramas and lyrical humor, shocking and emotional outpourings come up from picturesque improvisations - this is the artist’s self-expression. The way to realize the inner need, talent can be considered a position, to a certain extent, affecting the balance of power in contemporary art.

The fundamental connection of his work with traditions is a connection with the picturesque culture that has developed since the 60s among the “left” LOSH and symbolized by the groups of “Eleven” and “Eight”. And with its continuation embodied by such modern masters as Aron Zinshtein, Alexander Rumyantsev and Anatoly Zaslavsky.