In the gallery "Nagornaya" opens the exhibition "Special Drawing, or Graphics-not-graphics" - the first independent exhibition project of four graphic artists, graduates of the Moscow Art and Art Museum in memory of 1905 (department "Graphic Design"). 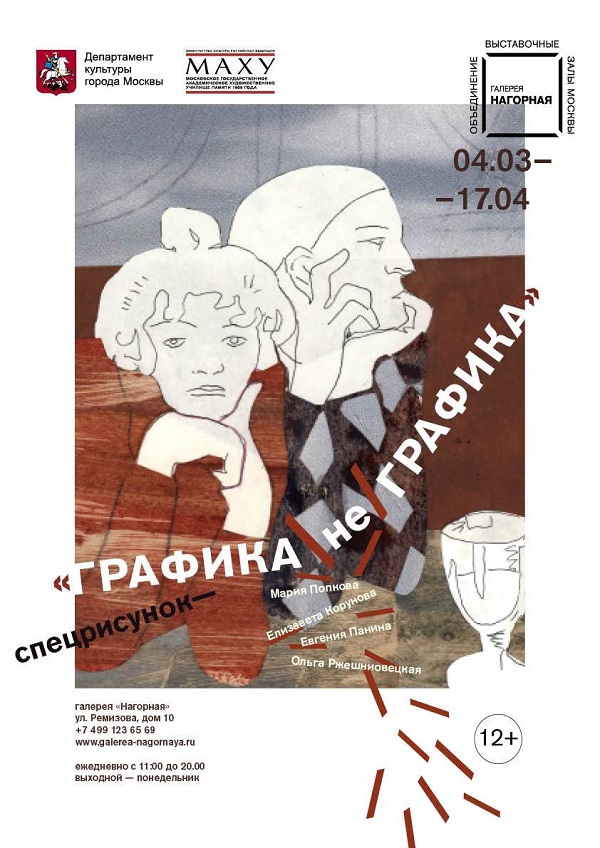 The attitude of novice artists to academic art developed during his studies at the Moscow State Art University. Studying traditional graphic techniques, turning to calligrams (graphic poems, the text of which is written in the form of drawings), then to collages, young artists searched for the necessary means for self-expression. The direction of their work, without a precise definition, was given the code name "Special Drawing".

The result of the creative experiments of the Quartet was the formation of an alternative view of the concept of graphics. Their innovative ideas took shape, transformed into images that are free from definitions. The exhibition will feature works created by the author’s method specifically for the exhibition, as well as video art.

The exhibition is held as part of the celebration of the 90th anniversary of the Moscow State Art Academy in memory of 1905.

During the exhibition, a series of master classes will be held:

Evgenia Panina, Elizaveta Korunova
Creation of creative work based on collage technique with elements of monotype and free drawing.

Maria Popkova, Olga Rzheshniovetskaya
On the role of creative improvisation and the ability to see an unscheduled idea.

About the features of monotype (the type of printed graphics) and the creation of a fabulous portrait of a person based on his realistic perception.

"The miracle of our imagination" lesson for children 4-10 years old
How not to be afraid of a clean slate? Lesson on the development of imagination and maintaining the desire to draw.

The Moscow Exhibition Halls Association was created by the Moscow City Department of Culture in 2013. The Association includes 18 galleries located in nine districts of the capital.

The Moscow State Agricultural Academy in memory of 1905 is an art school founded in 1925, a leading educational institution, and a methodological center. Many great artists studied at the Moscow State Art University, including: Anatoly Zverev, Nikolai Vechtomov, Dmitry Plavinsky, Vladimir Dubosarsky.