An exhibition of author’s dolls from the collection of St. Petersburg collector Marina Mironyuk and an exhibition of microminiatures by V. Aniskin "Marvel under the microscope"

From September 7 to October 29, 2017, two exhibitions will simultaneously work in one of the halls of the Kaluga Museum of Fine Arts (Lenin St., 103): an exhibition of author’s dolls from the collection of St. Petersburg collector Marina Mironyuk and an exhibition of microminiatures by V. Aniskin “Marvel under the Microscope”. (official opening is not planned). 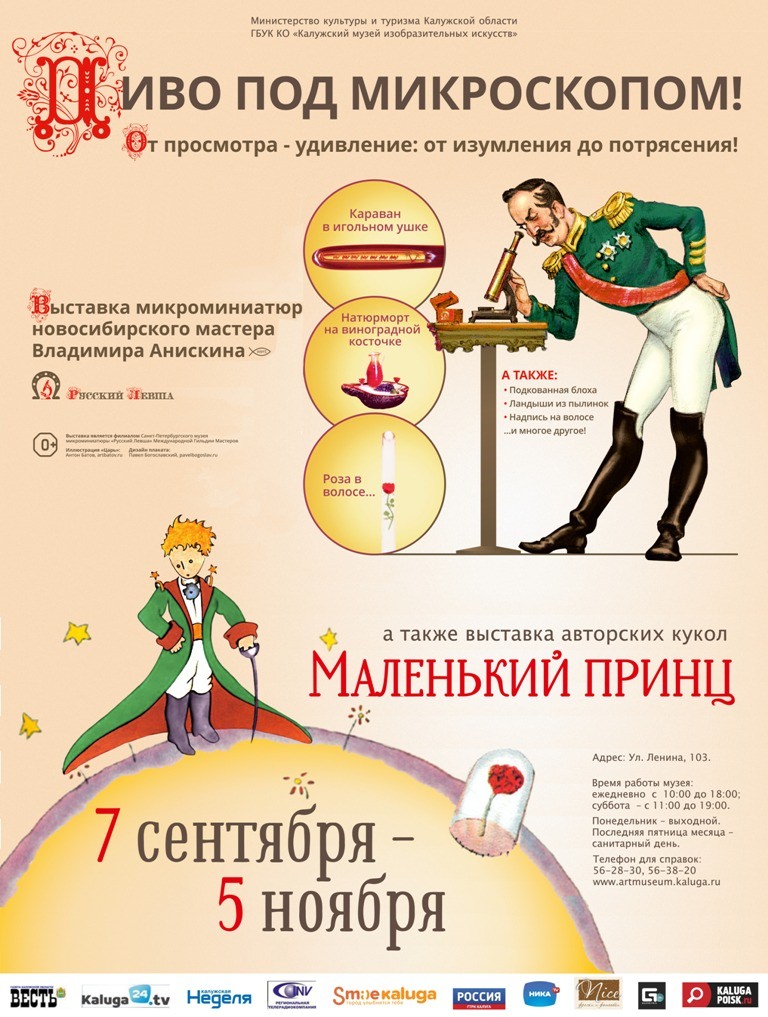 The doll exhibition features works by Russian authors Elena Yashenkina, Yulia Parfenova, Galina Ulanova from St. Petersburg. The exhibition combines the whole variety of puppet images: here are the heroes of A. Exupery’s work “The Little Prince”, and fairy-tale characters designed for children’s audience, and folk, antique dolls of the 30-40s of the last century that will be interesting not only for children, but also for adults (more than 200 exhibits). At the exhibition, you can also see a collection of Barbie Yana Mirnaya dolls from the cultural capital of Russia. These are real works of art by famous designers: Bob Makey, Byron Lars, Christian Dior, Nolan Miller, Versace. These dolls were made in several copies and were never sold in Russia. Each of them is unique: dolls from the series “Deities of the Continents” (goddesses of America, Asia, Africa, the Arctic) are distinguished by powerful splendor, from the series “Gemstones” (diamond brunette, ruby, emerald, sapphire and amethyst Barbie) - with a luxurious precious frame, models from the Empress and Princess of the World series - with royal grace, and celebrity dolls (Romeo and Juliet, Frank Sinatra, Marilyn Monroe, Elvis Presley) - a creative embodiment of a creative idea and incredible similarities with world-famous personalities yours.

In addition to dolls, visitors to the Kaluga Museum of Fine Arts will be able to see exhibits from the interactive museum of microminiatures, opened in 2006 in St. Petersburg. Microminiature is a rare art form, which is the creation of amazing works, the size of which is measured not even in millimeters, but in microns. You can only see them with the help of complex magnifying devices (microscopes). The exhibition of microminiatures presents the works of Vladimir Mikhailovich Aniskin, doctor of physical and mathematical sciences. V. M. Aniskin lives in Novosibirsk, works at the Institute of Scientific Research Institute of Theoretical and Applied Mechanics. Since 1998, he has been creating manually his unique works. In his works, the author uses various techniques: blacksmithing, casting, glass processing, work with birch bark, jewelry. Processing processes at the micro level repeat in detail the usual technological processes. His collection has more than 100 invisible works, each of which is equipped with an optical system for viewing and a visual description. “Camels in the eye of an eye”, “Lilies of the valley on a poppy seed” (made of dust particles), “The inscription on the hair”, “Savvy flea” - all these and many other works of the Russian master-microminiaturist Vladimir Mikhailovich Aniskin can be seen at the exhibition (about 60 exhibits).

Also at the exhibition of microminiatures visitors will be able to view unique exhibits - inclusions. Do you know what “inclusions” are? 40-50 million years ago, when dinosaurs inhabited the territory of Europe, coniferous trees “Pinas Sucinifer” grew on the coast of the modern Baltic Sea. In the hot rays of the sun, pines exuded tar, it, descending the trunk, carried away small insects, leaves, pollen of plants, and then hardened, turning into a substance that could retain any plant, insect, air for tens of millions of years in its captivity. Resin fell into the sea, covered with silt, drifted with sand, keeping the treasures of the ancient world inside. So amber appeared. He then preserved inclusions - the fossil remains of organisms that fell into the ancient resin. Museum visitors have the opportunity to examine insects with their magnifying lens, which are already the fifth ten million years old.