The II International Scientific Symposium of the National Committee of ICOMOS, Russia "Monuments of the World Cultural Heritage - Problems and Prospects" was held in Veliky Novgorod

The II International Scientific Symposium “Monuments of the World Cultural Heritage - Problems and Prospects” and the Annual Conference of the National Committee of ICOMOS, Russia ended in Veliky Novgorod.

The event, which took place from September 19 to 21, 2018, became a large-scale and most important event in the field of preservation of the cultural heritage of the Russian Federation. It was attended by international ICOMOS members from 10 countries, as well as more than 200 ICOMOS members and experts from 20 regions of the Russian Federation. Among them: the leaders of ICOMOS International: Vice-President of ICOMOS for Europe Grellan Rourke (Ireland); Riin Alatalu, member of the ICOMOS Council, President of the ICOMOS Estonian NC; ICOMOS Vice President Alfa Diop (Mali); member of the ICOMOS Council, President of the ICOMOS Kazakhstan Natalia Turekulova; ex-Secretary General of ICOMOS Kirsty Kovanen (Finland), Secretary General of the Fund Romualdo del Bianco Simone Giometti (Italy). 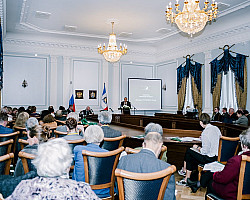 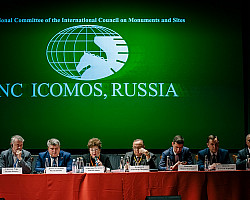 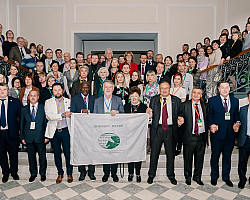 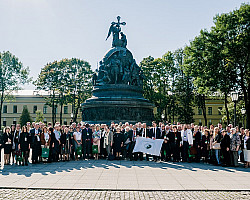 II International Scientific Symposium was welcomed by Academician A.P. Kudryavtsev, President of the National Committee of ICOMOS, Russia; ICOMOS Vice President for Europe G. Rourke; Deputy Director of the Department of State Protection of Cultural Heritage of the Ministry of Culture of the Russian Federation P.O. Mosolov; VN Nepryakhin, chief federal inspector for the Novgorod region, on behalf of A. D. Beglov, plenipotentiary representative of the President of the Russian Federation in the Northwestern Federal District; Deputy Governor of the Novgorod Region - Deputy Chairman of the Government of the Novgorod Region A. V. Dronov; Deputy Head of the Department for State Protection of Cultural Heritage of the Republic of Bashkortostan A. Yu. Peshkov and other officials.

The Conference of the ICOMOS National Committee, Russia, was attended by 68 delegates representing 12 regions of the Russian Federation.

Conference participants noted the importance and positive results of the work carried out by NK ICOMOS, Russia after the Annual Conference held in June 2017 in Yaroslavl.

Cooperation agreements were concluded between the Interregional Public Organization ICOMOS National Committee, Russia and: the Ministry of Culture of the Russian Federation, the Government of Veliky Novgorod, the Government of the Republic of Bashkortostan, the Union of Architects of Russia.

The delegation of ICOMOS NC, Russia took part in the 19th ICOMOS General Assembly, the Extraordinary General Assembly of ICOMOS and the International Scientific Symposium "Cultural Heritage and Democracy" in New Delhi (India), in a joint meeting of the Presidents of the ICOMOS European Group in Helsinki and other events International ICOMOS.

4 scientific committees have been created: “The Legacy of Industrial Architecture and Engineering”; "Management of the archaeological heritage"; “Theory and practice of engineering diagnostics, stereophotogrammetry and integrated monitoring of OKN”; "Historical Necropolises."

On an ongoing basis, together with regional branches, expert advisory activities are being carried out in the direction of the protection and preservation of cultural heritage. And also expert assessments are given: according to the plans for the management of UNESCO World Heritage Sites “The Ensemble of the Ferapontov Monastery”, “White-stone monuments of Vladimir and Suzdal”, etc.; for an official application for the introduction of the object “Cultural landscape of Pereslavl-Zalessky: Transfiguration Cathedral in 1157 with adjacent ramparts and archaeological heritage sites”; on reports on assessing the impact on the outstanding universal value of UNESCO World Heritage Sites “Historical monuments of Veliky Novgorod and its environs”; "The historical and cultural complex of the Solovetsky Islands"; on the planned construction of the hostel of the Novgorod State University named after Yaroslav the Wise; on nomination dossiers “Rock art of the Shulgan-Tash cave of the Paleolithic era”; "White Sea and Onega petroglyphs." The problematic issues of the situation around the construction in the buffer zone of the Moscow Kremlin "Multifunctional-complex development on Sofiyskaya Embankment"; construction of a residential building at the address: St. Petersburg, st. Gastello, d. 7, lit. BUT; Pulkovo Observatory; Red Banner factories in St. Petersburg; new construction near the church of St. Nicholas the Wet in Yaroslavl and others.

According to the resolution of the ICOMOS NC adopted at the Annual Conference, Russia plans to:

According to ICREPO Vice President for Europe Grellan Rourke (Ireland): “The conference is important not only from the point of view of Russia, but also from an international perspective… The reorganization of the structure of ICOMOS, Russia; it was a gradual and complex process, but it was successful and now it is a very strong organization, which is important from the point of view of international cooperation… I am convinced that NK IKOMOS, Russia will continue successful work to preserve the cultural heritage of Russia step by step, and will also continue to participate in the activities of the international community, especially in the work of scientific committees. ”

Grellan Rourke also read out a message from Toshiyuki Kono, President of ICOMOS, to the participants of the II International Scientific Symposium. “The topic you have chosen for your conference is central to ICOMOS. In the increasingly complex context of the 1972 World Heritage Convention, it is important that ICOMOS focuses on providing technical advice of high quality and integrity and ensuring that we speak with one voice as an organization. We are grateful to the National Committee of ICOMOS, Russia for the attention that it pays to requests sent by the International Secretariat of ICOMOS in the context of our role as an Advisory Body to the Convention, the efforts it is making to monitor the state of conservation of world heritage in Russia and to meet with ICOMOS experts, your business trips on your country. The fact that 2 years after the election of the Permanent Council of the new National Committee, you can gather more than 200 experts from more than 20 regions of Russia with the support of your authorities and prestigious partner organizations, shows the successful trajectory of your National Committee that it has firmly embarked on the right way, and we warmly welcome his growing participation in ICOMOS international events… "

Academician Alexander Kudryavtsev, President of the ICOMOS National Committee, Russia, noted that the event was not accidentally held in Veliky Novgorod, where there are many cultural heritage sites, including those inscribed on the UNESCO World Heritage List. “This place is optimal for the dialogue of all participants in the process of preservation, restoration and management of cultural heritage objects. I would like to thank the Administration of the region and the city for the opportunity to work in this unique place. We thank the Ministry of Culture of the Russian Federation for supporting the event and the opportunity to invite reputable Russian and foreign experts, ICOMOS leaders, who are always ready to accept our invitation… "

Natalia Almazova, Vice-President of the ICOMOS National Committee, Russia, noted that “International ICOMOS is an official consultant of the UNESCO World Heritage Committee and it is impossible to submit a review of nomination dossiers from any country in the world without expert examination or the conclusion of representatives of ICOMOS national committees. Despite the fact that we are a young Committee, we have fruitful, effective, and, most importantly, friendly interaction with the national committees of the ICOMOS member countries, with the ICOMOS secretariat, and with the Russian Federation Commission for UNESCO. I am sure that the existing cooperation will help us continue to effectively continue the development of the ICOMOS National Committee, especially in the field of creating new scientific committees, performing various consultative missions and examinations. ”

Natalia Almazova also read out a welcome address by the Executive Secretary of the Commission of the Russian Federation for UNESCO, Ambassador-at-Large of the Russian Ministry of Foreign Affairs Grigory Ordzhonikidze to the participants of the II International Scientific Symposium “Monuments of the World Cultural Heritage - Problems and Prospects”, in which G. E. Ordzhonikidze expressed sincere gratitude and thanked, on behalf of the Commission of the Russian Federation for UNESCO, the Governor of the Novgorod Region Andrei Nikitin, President of NK ICOMOS, Russia Alexander Kudr Yavtseva and Vice President of NK ICOMOS, Russia Natalia Almazova: “It is difficult to overestimate the stated theme of the Symposium. The problems and prospects of the World Heritage Sites of Russia are of particular importance for modern society. Its relevance is determined by both the urgent need to ensure the dynamic development and renewal of territories, and the importance of maintaining their outstanding universal significance… The problems of preserving the World Heritage for many decades have been in the focus of attention of politicians, scientists and public figures. However, today, in the XXI century, in the conditions of intensive development of international economic relations and globalization, it is acquiring special relevance. In this context, more than ever, it is important to strike a balance between respecting economic interests, improving infrastructure and preserving the unique heritage of ancient cultures. To achieve this goal, it is necessary to fully utilize the potential of the National Committee of ICOMOS, Russia. ”

Pavel Mosolov, Deputy Director of the Department of State Protection of Cultural Heritage of the Ministry of Culture of the Russian Federation, began his speech by saying that this Symposium is one of the key events of 2018 dedicated to World Heritage Sites, and that Russia is doing very serious work to promote cultural heritage sites on the World List heritage. “At present, Russia is among the ten countries in terms of the number of World Heritage Sites. This is a very serious indicator. To include an object on the World Heritage List is a very painstaking work. But it is much more difficult in the future to fulfill all the requirements in the international arena, especially in the existing conditions of the worldwide urbanization of historical territories… Given that ICOMOS is a key consulting organization of UNESCO, recognizing the importance of fulfilling international obligations, the Agreement between the Ministry of Culture of the Russian Federation and the ICOMOS National Committee was first concluded, Russia".