Joseph Efimovsky is a member of the legendary Leningrad Battle Pencil association. During the war years, it issued informational and satirical posters, as well as combat leaflets, which were examined by soldiers at the front and residents of besieged Leningrad. Later, the artists of the association depicted the cool relations of the USSR and the capitalist world, stigmatized the sharks of imperialism and, praising the labor exploits of the people, held the battle for the crop on the tip of a pencil.

At the exhibition of Joseph Efimovsky in the Erart Museum presented man-made copyright sheets of the artist 1970-1990-ies, which were distributed throughout the Soviet Union. In the association, the author was considered a singer of the everyday genre: in his cartoons everyday life is reflected, the problems of upbringing, generational relationships, behavior in public places, drunkenness and negligence of officials are raised.

In the sheets of Efimovsky there is a unique intonation of the era, set by the Soviet propaganda machine. Of course, with the collapse of the Soviet Union and the beginning of the digital era, life realities have changed dramatically, but many of the problems reflected in the artist’s work still excite society. 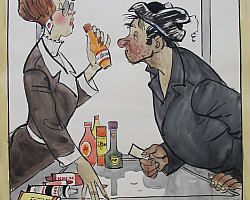 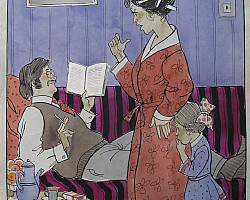 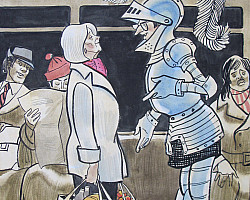 Andrei Popov is a representative of a new generation of satirists: his work can hardly be called caricatures. He opened his own genre of hand-drawn parables, which is based on the gag, ridiculous absurdity. According to the author, it is the absurdity that makes his work related to caricature, which, in turn, can be not only a comedy, but also a melodrama or even a tragedy.

Andrei Popov did not study as an artist - he received an engineering education. Perhaps this is due to his unique ability to consider reality with a microscope and a telescope at the same time: steadily peering into the smallest details, the author sees the whole. The change of seasons, the male and female worldview, the lives of our smaller brothers, the elements of Russian reality - the artist is touching and surprisingly accurate, with irony and self-irony, describes the essence of our daily existence.

Andrei Popov’s works regularly receive the highest marks at international art competitions, and this is not surprising: his philosophical cartoons are cosmopolitan and speak with a person about a person in a universal language that is accessible to all. 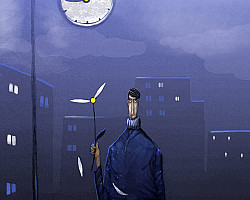 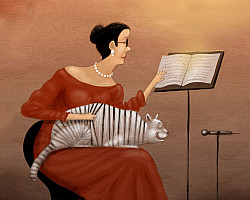 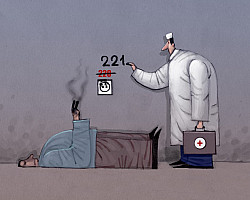 The exhibitions of Joseph Efimovsky and Andrei Popov will be open on the 2nd floor of the Exhibition wing of the Erart Museum until September 23, 2019.