Odessa JazzFest International Jazz Festival for the 15th time will be held in Odessa from September 18 to 20, 2015.

Held for the first time in Odessa in the year 2000 under the name "Jazz Carnival in Odessa", Odessa JazzFest for the past 15 years remains the only international festival of jazz music in Odessa and the region. The permanent head of the Odessa JazzFest festival is pianist and composer Yuri Kuznetsov. 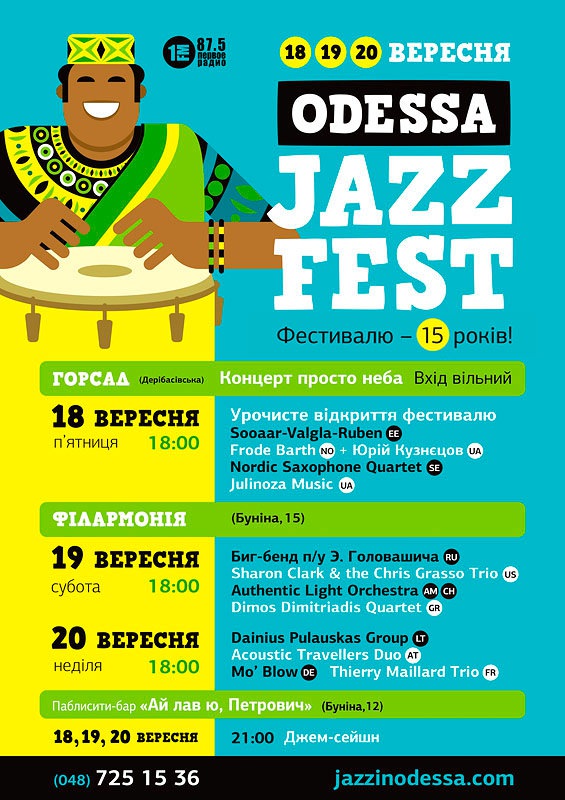 The concept of the Odessa JazzFest festival, inherited from the "Jazz Carnival in Odessa", is multi-genre and multinational. Every year, musicians come to the festival, representing with their work all directions of modern jazz music: from dixieland to free jazz. Invariably throughout all these years the festival’s credo is to reveal new names to the public: the lion’s share of the projects presented over the years on the festival stage toured for the first time in Ukraine. New items on the Odessa JazzFest ’2015 festival map are Armenia, Greece and Estonia.

By tradition, the Odessa JazzFest festival will solemnly open on September 18 with a gala concert in the rotunda of the City Garden on Deribasovskaya Street. Entrance to the open air concert will be free for all jazz lovers! At the opening of Odessa JazzFest ’2015, Norwegian guitarist Frode Barth and the head of the Festival, pianist Yuri Kuznetsov, Estonian Trio Sooäär – Valgla – Ruben, the Swedish Nordic Saxophone Quartet, the big band of the Poltava orchestra pu E. Golovashich, and Odessa jazz performers will perform at the opening: trio Julinoza Music and pianist Vadim Bessarab with his project.

Two festival days (September 19 and 20) concerts will be held on the stage of the Odessa Regional Philharmonic, which also became a festival tradition. In two days, 8 groups will perform in the Philharmonic, in which musicians from 9 countries are involved. For all foreign projects, this will be their first performance in Ukraine.

For the first time in Ukraine, it was at Odessa JazzFest that the Dainius Pulauskas Group will perform - a collective without which it is impossible to imagine a picture of modern Lithuanian jazz. This group is called "Lithuanian jazz ambassadors": musicians gave concerts at festivals of almost all continents of the Earth: in Europe, Asia, America and Africa! The time has come for Ukraine.

In the year when the whole world celebrates the 100th anniversary of the Armenian Genocide, Odessa JazzFest will present to its public a unique international multi-instrumental project Authentic Light Orchestra (Switzerland-Armenia), the basis of which is made up of jazz compositions of Armenian folklore.

Another participant of the festival, one of the most experienced jazz saxophonists of Greece Dimos Dimitriadis, also draws inspiration from folklore - Balkan and Greek. And in the music performed by the Austrian duo Acoustic Travelers Duo, elements of flamenco, Indian music and African folklore are heard.

Classical old jazz will be presented in Odessa by American singer Sharon Clark, who was invited to the Festival on the personal recommendation of Larry Appelbaum (senior specialist in the music department of the Library of Congress in Washington), a former guest of Odessa JazzFest in 2013. For Sharon, this will not be the first visit to Ukraine, but the first performance in our country together with the Chris Grasso Trio project.

It was from the invitation to Odessa JazzFest ’2015 that the all-Ukrainian tour of the famous French pianist and composer Thierry Maillard grew up, who will perform in Odessa with his trio a few days before the release of the new album The Kingdom of Arwen, recorded in collaboration with the Prague Symphony Orchestra.

A permanent participant of the festival - Germany - this year “delegated” to Odessa JazzFest a young and very promising quartet Mo ’Blow, playing funky music. The producer of the group’s latest album was the famous Swedish trombonist and composer Nils Landgren, who became famous for the ABBA jazz-funk hits.

Every evening, after the end of the main block of festival concerts, jam sessions will be waiting for the audience at the Ai Lav Yu, Petrovich Public Pub Bar (19 Bunina St.).

Detailed information about the participants of the Odessa JazzFest-2015 festival is available on the official Internet page: www.jazzinodessa.com

The program of the festival Odessa JazzFest ’2015:

Grand opening of the festival. Open air concert with the participation of foreign and Ukrainian groups: