The Erarta Museum presents the first exhibition in St. Petersburg by Dani Akulin, an artist who conquered Europe by drawing skill. For the first time he will present his monumental landscapes in St. Petersburg, returning the right to independent artistic expression to the drawing.

Dania Akulin, or Danja Akulin, was born in Leningrad in the family of the artist. 20 years ago, he interrupted his studies at the N.K. Roerich College and, after passing a serious competition, ended up on the course of Professor Georg Baselitz at the Berlin University of the Arts. Almost all publications devoted to the author mention his eminent mentors - Georg Baselitz and Daniel Richter. However, Danya Akulin’s creative influence was rather influenced by a radically different education system, thanks to which his drawing skill, honed by the drill of Russian drawing classes, flourished. The result of mastering the advanced artistic experience of Berlin was a return to the fundamental concepts of aesthetics: Akulin does not hesitate to reflect on the beautiful, and his pictorial language is formed literally in the workshop of nature. 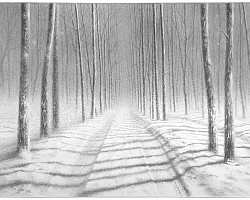 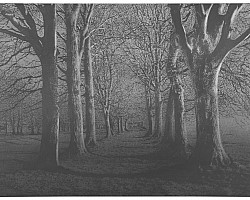 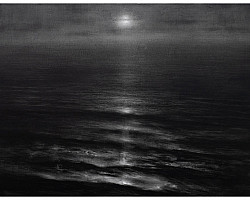 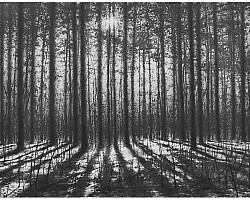 Danila Akulin’s paintings are an apology of drawing as an independent artistic expression. The author deliberately limits his means. “I experimented a lot, studied sculpture, then painting, until I realized for myself that I can say much more with a pencil than with a brush and paints,” the artist muses. - The line drawn with a pencil is many times more interesting to me of the line drawn with a brush or the line that arose at the border of two color surfaces. She can convey much more information. ”

The scale of the landscapes of Akulin corresponds to the grandeur of the depicted. The endless sky, fields and open sea are associated with metaphysical landscapes of K. D. Friedrich. But where romanticism sounded an enthusiastic hymn to the universe or a pacifying elegiac motive, Akulin, who creates the world literally from the chaos of darkness, has a disturbing feeling of discord with a majestic element.

The exposition at the Erart Museum will unite the monumental landscapes of Akulin, made over the past ten years. The project will be open to the audience from August 15 to November 10, 2019. Entrance to the Penumbra exhibition is free for owners of Subscriptions to the Erarta Museum.