This legendary holiday is already more than thirty years old. This year, the festival gathered people in the area of ​​the village of Hlyupino, in the Golitsyn district. Our correspondent and photographer Surzhina Diana went to photograph mummers and folk fun for new paintings. 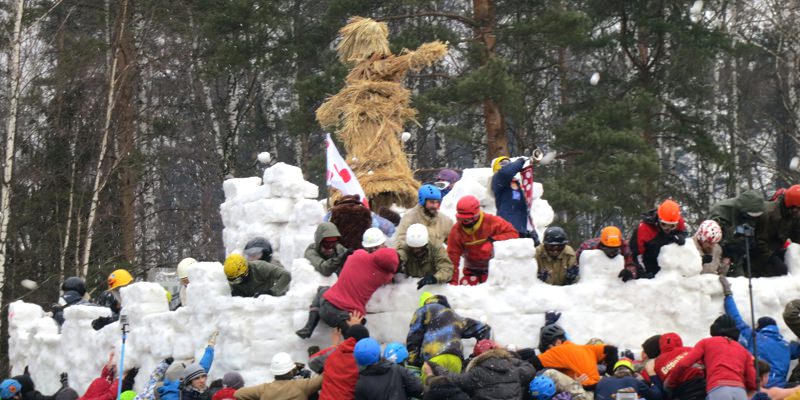 Natalya Kharpaleva, a journalist from Rozhdestvenka, who is involved in the script and creative part of the Bakshevskaya Maslyanitsa and has been coming to the holiday since 1991, spoke about the features of this fun holiday:

- Every year in a clearing near Moscow, far from roads and settlements, a snowy city is built right in the middle of the forest. On Forgiving Sunday, several thousand people walk three to four kilometers from the railway platform along the forest path, carry pancakes and thermoses with tea in their backpacks, dress up in sundresses, scarves, put on beads from bagels, and then through the snow gate enter Polyana and there all day they sing, dance, play, ride from the mountains, swing on a swing, wake up with bear buffoons, led by Maslyanichny Voivode, storm a three-man-tall snow fortress, burn an oil scarecrow to spring casts, eat pancake We are happy and having fun like children. 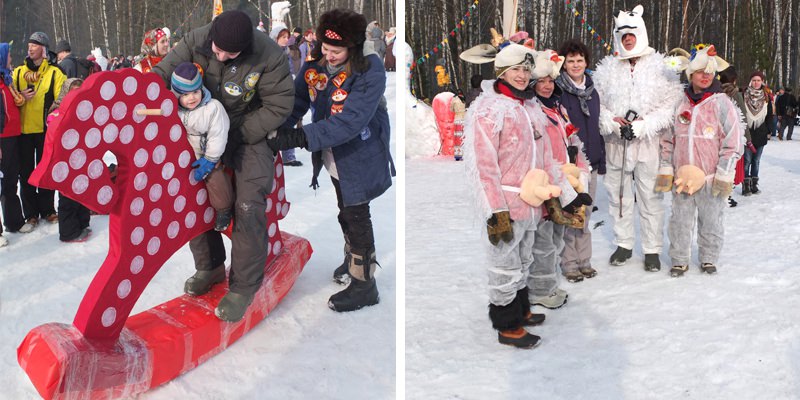 Everything is free. Nowhere, no ads, no announcements. On the contrary, word of mouth over decades has gained such momentum that the organizers have to restrain the flow of comers. The audience is going to be the most motley: restorers and tourists, folklorists and songwriters, reenactors, students, pensioners, family clubs, athletes… The main thing is that all people are positive, easy-going, ready to get up early in the morning, leave the car in the city, take the train and spend the whole day in the winter forest on Bakshevskaya Maslyanitsa. 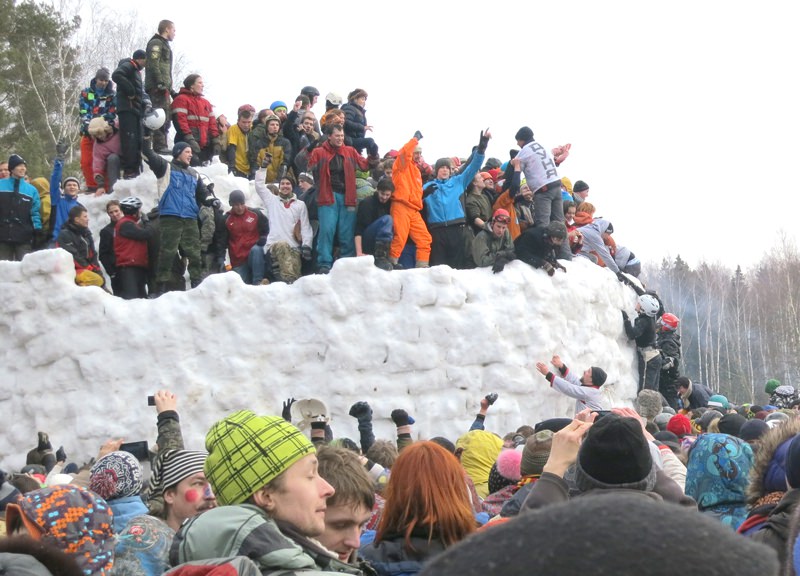 The organizers explain the strange proper name chosen for the holiday as follows: “Maslianitsa” is a tribute to traditions. The outdated spelling of the word - through "I" - emphasizes the connection of the holiday with traditional folk culture. It can be found in the dictionaries of Dahl and Ushakov, on old postcards. And “Bakshevskaya” - in memory of Mikhail Bakshevsky (02.16.1960-17.01.1998), standing at the origins of the creation of the holiday.

This "secret" holiday was born, one might say, by chance. In the mid-eighties of the twentieth century, the movement of voluntary assistants to restorers gained strength in the capital. Enthusiasts gathered for subbotniks, helped restore architectural monuments. In the summer, the same people united in field detachments, traveled around cities and towns, worked on the restoration of ancient estates, destroyed temples. In 1984, the idea arose to make a common holiday for restoration teams. According to the calendar, Shrovetide was ideally suited for such an action: spring, summer, autumn - this is active work and field trips, and in winter you can relax and have time to prepare your holiday. 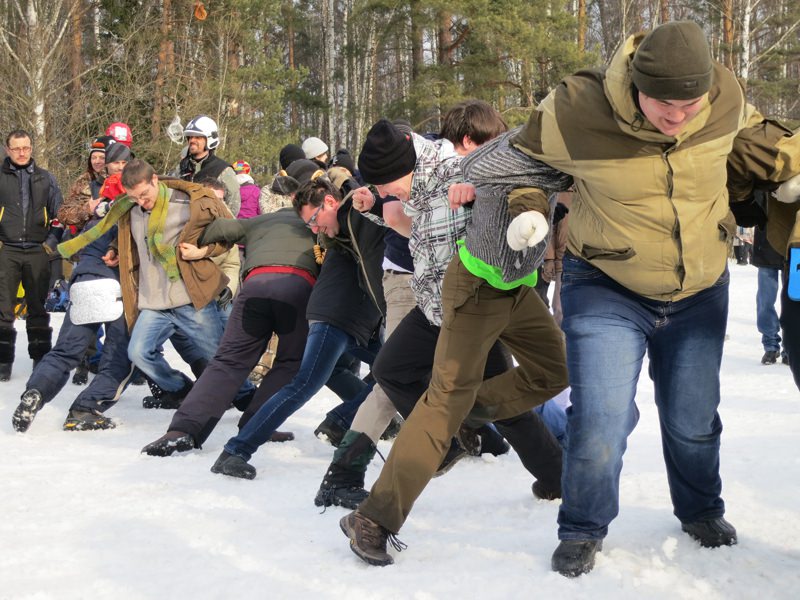 Only a few hundred people gathered at the first Shrovetide. Holidays were organized first near the old estates near Moscow, and then gradually moved to the forests.

One of the main organizers of Maslenitsa voluntary assistants to restorers was Mikhail Bakshevsky - a hero, clever, enthusiast and bezrebrennik for many years and who devoted much energy to restoring monuments. Thirteen Pancake Weeks took place under the leadership of Michael.

From the very beginning, the guys from Rozhdestvenka, an informal community that grew out of the restoration team of the same name, joined the Maslostroy. It was Rozhdestvenka that picked up the baton of Pancake week preparation after the untimely death of Misha Bakshevsky.

The “Christmas” community has existed for more than twenty years. During the year, people of different specialties and interests, united by a love of Russian culture, nature, healthy pastime, help in restoration work, master the folk tradition, go hiking, travel around the cities of Russia. And in the winter they make Maslyanitsa - every weekend with families, with children they build a snowy city in the forest. Everything is voluntary and free. 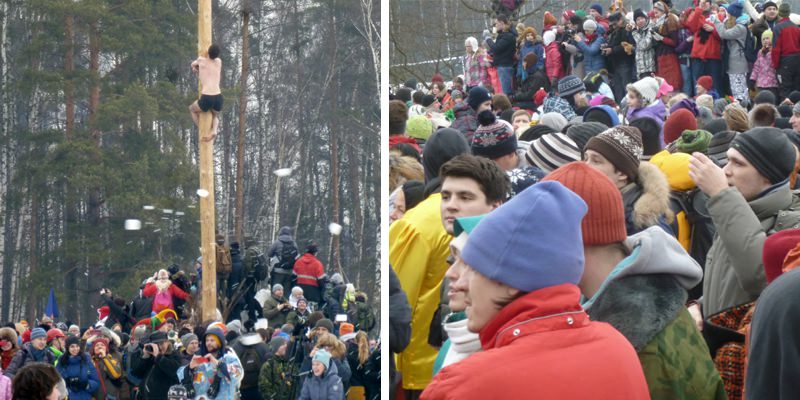 Over the years, the holiday has developed its own unique format. Each year, a new meadow is selected for the Bakshevskaya Maslianitsa - for environmental reasons, for reasons of conspiracy, and in order not to interfere with local residents and the authorities. The basic principles of cleanliness, sobriety and the complete absence of commerce are strictly observed.

Thirty years is a serious period. It is hoped that the quantity goes into quality and Bakshevskaya Maslyanitsa ceases to be unique. People who have been visiting guests at Bakshevka for many years are slowly trying to organize their Shrovetide - for the time being for friends and relatives. At least they know that it is possible - on their own to just give people a holiday.