Azam Atakhanov. "Poem about the meanings"

The exhibition project of Azam Atakhanov “Poem on the Meanings” will be held in the ARTSTORY gallery from June 6 to July 28, 2019. Visitors will find a bright, colorful, but at the same time full of philosophical allusions journey into a world bewitching with its beauty. There is a meeting not only with a virtuoso painter-colorist with an inimitable sense of color, but also with a poet and thinker. Atakhanov, an artist who synthesizes in his work the cultural traditions of the Persian East, Russian avant-garde and the European Renaissance, shows a different, metaphysical side of reality, only outwardly similar to the surrounding reality.

For the artist, the most important categories of painting are color and space: he is interested in color saturation, correctly found tone, his "sound" in the picture. “Initially, the task of painting is to create and transmit with the help of color the image, information, feelings, as in music with the help of sound. Everything related to color, space and its impact on the viewer is what I have been doing for 30 years, ”says Atakhanov.

The master calls the source of inspiration the beauty of nature and man in it; all that is created by man: works of art and architecture, poetry, gardens and villages, dwellings and objects of folk art, and of course, music. Art for Azam Atakhanov is the creation of the good, the true, the attribute of which is beautiful. “How is music different from noise, painting from a painted plane, literature from job description? Only beauty. Only true beauty gives art meaning. To comprehend and convey it is the artist’s only true task. ”

Speaking about the origins of the artist’s creative manner, they often call representatives of the “first avant-garde” possessing universal, pantheistic thinking: P. Kuznetsov, R. Falk, D. Shterenberg; as well as N. Krymov and V. Favorsky. From them - the attitude to the details of the landscape as to spiritualized beings. And the monumentality of the paintings refers to another series of spiritual teachers: to the artists of the Italian Renaissance - Duccio, Giotto, Fra Angelico, Gozzoli and, especially, Mantegna and Tintoretto.

The existence of a figure in a natural landscape is no less significant element of Atakhanov’s pictorial philosophy. Traditional oriental plots or female images, which are found in almost every picture of the master, only at first glance carry the main semantic load in the works. Here we should talk about the interweaving of meanings, about a return to deep roots, to those times when painting was based on philosophy and religion. This is a line from a fascination with Persian miniature and Sufi culture.

The name of the exhibition in the ARTSTORY gallery “Poem on the Meanings” refers to the work of Rumi, the great Persian poet-Sufi. An artist, putting philosophical meaning in his works, always suggests thinking about the main thing, about the eternal and nonrandom. “If you don’t follow the path of knowledge and teaching, then you stop growing and at some point cease to exist, just like your work.” 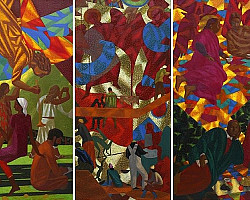 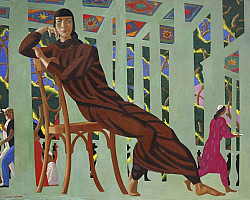 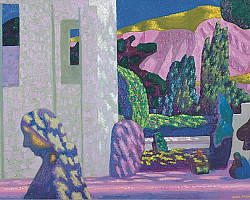 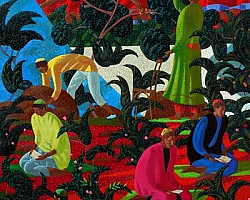 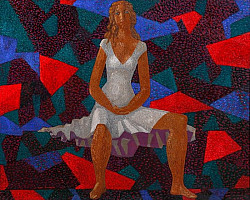