BRUSSELS. A painting bought through a used-goods website was identified as the work of Dutch abstract artist Willem de Kooning, lost many years ago. The portrait of the child was purchased by a Belgian couple for 450 euros (about 390 pounds) last year. Now its value is estimated at 50,000 pounds. 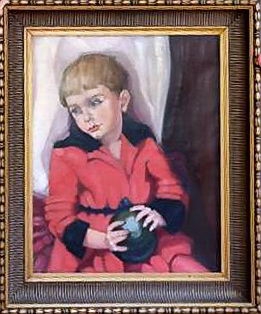 In the final episode of the fifth episode of the popular television show Fake Or Fortune? On BBC One, Ian and Chris Strax were asked to find out if the portrait signed by Wim Kooning was genuine, whether it really belonged to de Kooning, which at the beginning of his career in 1920 lived and worked in Brussels.

The couple went to Miami, accompanied by art critic Philip Mold (Philip Mold), to compare the picture with the famous works of de Kooning of the same time period. Analysis of the pigments used in both paintings showed that they are identical, however, expert Dr. Bruce Kaiser expressed uncertainty that this is exhaustive evidence that both paintings were painted by one artist. The de Kooning Foundation in the United States does not verify the authenticity of works of art, so it seemed that a final definition of authorship was not possible.

Philip Mold said: “We are at an impasse, recognized authorities could no longer deal with our case. More than ever, we had to rely on our own historical research and scientific observations. Fortunately, the evidence we collected is enough to claim that the picture purchased through the Internet really belongs to the brush of one of the most famous abstract artists of the twentieth century. ”

Recall in other episodes of the program, Philip Mold and presenter Fiona Bruce helped the couple in Eastbourne prove that the portrait that hangs in their living room was made by an 18th-century artist Philip Mercier, and the painting, which was considered for a long time the work of the German master Adolf von Menzel (Adolph von Menzel), in fact, a fake.