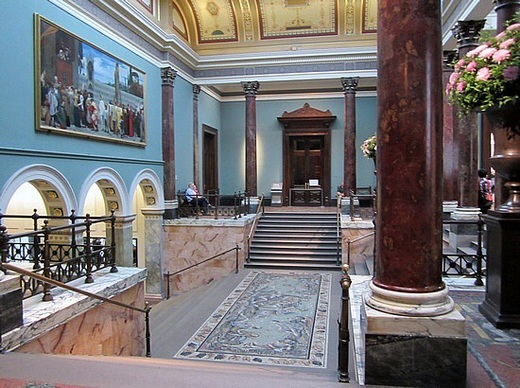 The London National Gallery is in danger of disrupting the Leonardo da Vinci exhibition, scheduled for next month, due to a possible major internal strike.

The museum’s curators are planning a demonstrative departure from the duty station during business hours and a strike to protest the downsizing. These actions, as protesters specify in advance, will leave artwork defenseless against theft or vandalism.

The protest was a peculiar consequence of the recent incident that occurred in the gallery. Recall that in July last year, the attacker damaged the paintings of Poussin, stained them with paint.

Owing to the state reduction in security costs, the gallery management instructed the gallery keepers, now called “gallery assistants,” that each of them would have to control not one, as before, but two rooms. In response to this, museum workers expressed dissatisfaction, emphasizing that the new decree poses a risk to exhibits, because the vandal that spoiled Poussin could commit a crime only because the keeper controlled the neighboring hall at that time.

About 200 employees, including museum curators, protested to the gallery’s director, Nicholas Penny.

At the moment, the National Gallery expects an unprecedented influx of visitors to the exhibition, where it is planned "the largest collection of rare paintings by Leonardo that have survived to this day." It is assumed that the exposition will open on November 9 - at the same time they are waiting for the first protest.

Negotiations between the management of the gallery and its employees are conducted by the Union of Public and Commercial Services (PCS). A secret ballot is held to determine the nature of the planned strike. “The strikers intend to act immediately,” says a PCS spokeswoman.

A spokeswoman disagreed with the gallery’s statement that the reduction decision was part of a long-term strategy, not just an attempt to save. “This is nonsense, since initially it was about cost reduction. Most of the museum employees are now on the verge of retirement, and the management is not going to look for a replacement for them. "

News of the strike came the day after the head of the association of museums was sharply criticized by the Minister of Culture. The latter demanded to stop treating museum specialists as “children,” believing that financial cuts would not affect the quality of work. Vanessa Trevelyan (Vanessa Trevelyan) reported that the closure of museums and the loss among the curators make ridiculous government statements about the savings.

A gallery spokeswoman said: “The National Gallery did not receive voting notices regarding the strike. However, if the strike plan is approved, we will need to take measures to mitigate the consequences. "

In the photo: the entrance hall of the National Gallery.
Photo by: Jnight (Travelpod.com member)