Unusual incident: a woman attacked the canvas of Gauguin

An unusual incident occurred in the afternoon of Friday. Visitors to the museum told The Washington Post that a woman was trying to remove Gauguin’s "Tahitian Women" from the wall and damaged the plastic cover of the masterpiece. Witnesses claim that in doing this, the visitor shouted: "This is evil!" 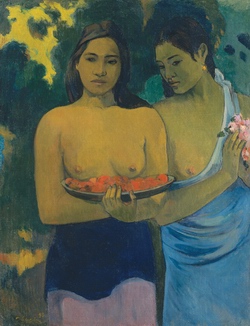 Officials at the National Gallery of Art report that Paul Gauguin’s painting "Tahitian Women" is now under examination after the painting was attacked by an unknown.

Gallery spokeswoman Deborah Ziska said the woman was detained by the museum’s federal security service. She is charged with property damage and attempted theft. The representative of the museum also reports that at the moment no visible damage was found and that more detailed information can be obtained after a detailed inspection of the canvas on Monday.

The picture captures two half-naked women. The canvas is part of a special exposition of Gauguin. From the official information about the picture from the National Gallery follows:

“Gauguin’s canvas“ Tahitian women ”dates from 1899 and is one of Gauguin’s most popular works. The artist portrayed two Tahitian women offering flowers, possibly during a religious ceremony. Their skin is highlighted with golden tones, which contrast with the cold colors of their clothes and the surrounding tropical meadow. The picture is a kind of confirmation of the myth created by Gauguin that Tahiti is a paradise full of beautiful, mysterious women. ”