On Saturday, April 30, 2016, as part of the international spring festival, the Roerichs’ estate in Naggar hosted the grand opening of the exhibition of reproductions of Lyubov Talimonova’s paintings “The Wanderings of a Joyful Soul”. Honorary guests of the exhibition were Senior Advisor to the Embassy of the Russian Federation in India S.V. Karmalito, and. about. Director General of the N. K. Roerich Museum (Moscow) N. N. Cherkashin, prominent Indian scientists - professors Sunit Chopra and Arun Mohanti. 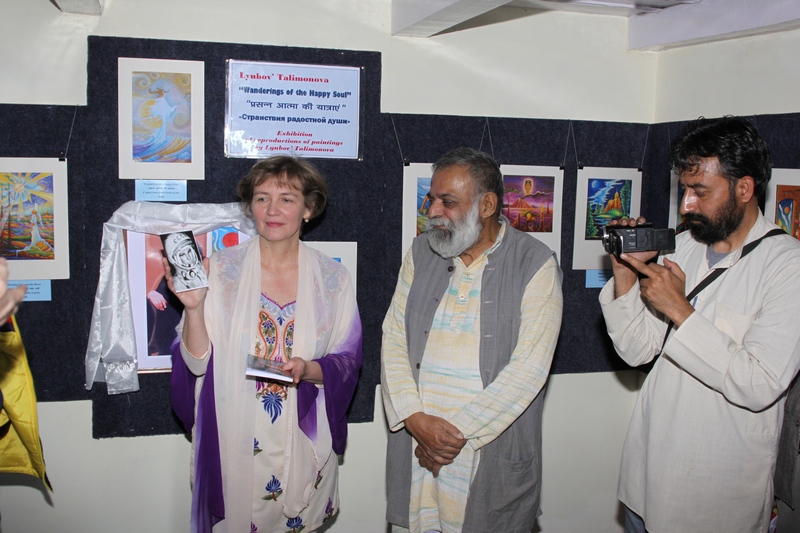 Lyubov Talimonova (1971-2011) - Russian artist, storyteller, poet. During her short but vibrant life, Lyubov Talimonova wrote dozens of poems and fairy tales and illustrated them with hundreds of incredible paintings, which captured an extraordinary world, luminous and beautiful, which always captivates and attracts the audience:

Bright stars round dance,
And the moon’s yellow circle
And the Milky Way through the entire sky.
How Soul yearns for distant worlds
And seeks to rise there
Where there is endless space
And where there is no time
And where does the star shine of happiness…

Her soul lived in a mysterious and happy world, but life prepared difficult tests for both Lyuba and her parents. “In early childhood, the daughter suffered the flu, and he gave a very serious complication in the form of a severe form of insulin-dependent diabetes mellitus,” says Nila Talimonova, Lyuba’s mother. - In the early 1990s, problems with medicines and a sharp deterioration in the health of Luba forced the family to leave Russia and settle in England. There were medicines there, which means Lyuba could live and create. ”

A sharp deterioration in vision, six eye operations, kidney failure… Ten and a half of the last years of her life, Lyubov Talimonova lived on hemodialysis (an artificial method of extrarenal blood purification). But every free minute she painted and fairy tales, her thought penetrated into the depths of the Universe, where the past was inextricably linked with the future, and the free spirit of man knew the secrets of the planet and the Cosmos.

“The Road to Singing Stars”, “The Light of Other Worlds”, “The World of Subtle Radiant Energies”, “Pink Angels”, “Spirit of Fire” - these and many other paintings capture an alien, magical, luminous world and live a feeling of incredible freedom and joy.

“The Sun, the Moon and Ancient Stones”, “Sounds of the Sky”, “Megaliths Go to Infinity” - these paintings belong to the series “Megaliths”. “A strange, fabulous, fantastic journey to Eternity, where the stars mix and speak with the megaliths of the Earth, and the stones speak to people,” wrote one of the visitors to her exhibition in France about the paintings by Lyuba Talimonova.

Exhibitions of her paintings traveled to many countries. They visited England, Ireland, Germany, Spain, Italy, China. Love was elected a member of the Writers’ Union and the Union of Artists of Great Britain.

In 1992-1993 Lyuba’s paintings flew into space at the Mir International Space Station. In 1994, the Association of Space Flight Participants awarded L. Talimonova for the uniqueness of her contribution to the development of ideas of Russian cosmism.

“I want a house with a garden so that there is a place to put pictures,” Lyuba once wrote. - So that people can come and see the images of the new world without vulgarity, without malice, without darkness. So that people can be imbued with a fairy tale and rejoice. ”

These words of the daughter became a testament to her parents. In 2013, Nila and Alexey Talimonov returned to Russia and brought here the remains of Lyuba and her paintings. Near Tula, with the help of friends and philanthropists, they built a large two-story house, half of which was assigned to an art gallery. In April 2016, the grand opening of the gallery of paintings by Lyubov Talimonova, another island of Beauty and Good, took place in our difficult world.

Let for good people
Heaven will be eternal
With the radiance of singing stars.
May the sun rise for good people every day,
Chasing away the night.
To make the world beautiful and bright
May the world of people
Governs the good.

In January 2016, the parents of Lyubov Talimonova donated an exhibition of reproductions of paintings of their daughter as a gift to the International Roerich Memorial Trust in Naggar. The grand opening of the exhibition took place at the Devika Rani Exhibition Gallery at the MMTR Cultural and Educational Center, the doors of which opened for Naggar residents and visitors of the MMTR last October. At the end of the opening ceremony of the exhibition, the festival guests laid a new hiking trail connecting the MMTR Cultural and Educational Center with the museums of the Urusvati Institute.